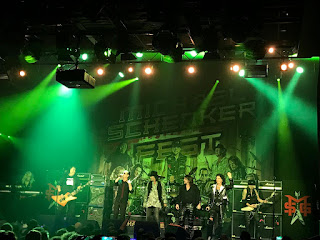 Michael Schenker Fest came to Holland so I wanted to be there and no delaying trains would stop me from going to the Melkweg. Michael Schenker is returning probably annually to Holland over the past years. Yet there is a difference from Saxon, Y&T, Raven to name just a few of his generation friends. I saw him over recent years with MSG playing mostly songs from his name band, with Temple Of Rock using the Scorpions rhythm session and focusing a bit on his Scorpions days. Last year for the first time Michael Schenker Fest played de Boerderij when he brought his three main vocalists from the eighties on tour. This year there was the return, but again another format as Doogie White now joined the band and they released earlier this year a new album Resurrection.So as I said enough reasons to travel to Amsterdam tonight. Magchiel thought exactly the same as it is this month 35 years ago we traveled together to Leiden to see MSG. 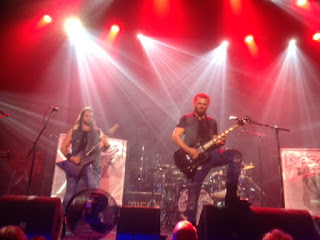 First there was an opener and not just any. Absolva is easily the best opener MSG brought along on tour over the years. Now Absolva are not unknown to me as they  played Musicon three times over the past years and I was there three times. This band plays Heavy Metal and although they always are announced as members of Iced Earth and Blaze Bailey I think their own name by now should be enough to attract people. Now my first thought was how would they go down in front of an MAG crowd. Tonight again it was clear that MSG pulls Classic Rock crowd, meaning you see basically any kind of fan apart from young kids with friends. Saxon for instance would pull a Heavy Metal crowd and bring more people who would appreciate them. Yet to me it gave the chance to move close to the stage and see Absolva play for a decent 40 minutes. So they have 4 albums and visited them all. The set included my favorite Never Back Down and I guess the ballad Only When It's Over from their debut went down best with the beautiful guitar solo at the start. This was the last of their support slots  on this tour and they continue headlining. 30 November they return to de Nobel and I hope to be there. If there shall be many remains to be seen as I did see some  fierce competition in metal gigs that night. 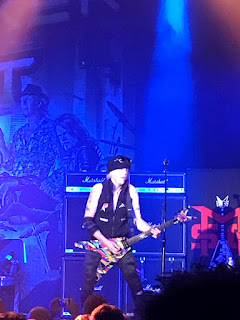 Michael Schenker back on stage and it did not take long before we got a first surprise. Michael walking on stage and starting a happy chat with the audience. Also he gained some kilos and now starts looking healthy. Finally you bring four vocalists and the first song he sang himself and asked the audience to join in on Holiday (Scorpions) Now I remember the chorus, but singing the verses was not at the top of anyone's head. Immediately hereafter we got Doctor Doctor the usual encore, where all vocalists would join in and the hall was warmed up. Hereafter the set followed a formula I remembered from last year. One vocalists singing songs from his era at times joined by others on backing vocals. So first on Doogie White to give us some recent songs.Not a problem as they sounded good and Doogie has a great voice still. New song Take Me to the Church turned into a favorite of mine and the Dio tribute in Before the Devil Knows You're Dead was already one of the best recent songs. Captain Nemo remains the second best instrumental Michael Schenker ever wrote. and Graham Bonnet came on next. Probably my favorite block of the evening as Assault Attack might be the best MSG album and these songs were all not that often in the set over the years. Graham Bonnet has to get some screams out of his toes, but often he just managed. Desert Song, well classic stuff. The next instrumental break was introduced with a nice speech on Rudolf Schenker and Gary Barden would sing the old MSG songs for us. Now all four would also sing a song from Resurrection, where they had the lead. Mr Barden seemed to be most at ease with new song Messin' around. The screams on Are You Ready to Rock for instance long left his vocal capacity. Yet he brings his songs sympathetic and gets away with this. After uber instrumental Into the Arena it was down to Robin McAuley. Now the McAuley Schenker years were reduced to one song Bad Boys only and he could focus on the UFO songs. With Strangers in the Night being the best live album ever, not much can go wrong there. And no matter the surprises or changes a Michael Schenker set always works towards that one guitar solo. In comes Rock Bottom and I should time the solo next year, but my god we are in guitar heaven and Michael Schenker is our God. Pity for the people on the right balcony, that he spend a few minutes of his solo so much right of the stage, that they could not see him. I did not mention yet that the guitar sound was perfect and Michael was probably in the best form in years. Seeing him soloing away makes anyone humble and all the new songs gained so much power now that I saw the solos live. So this is called a Fest and a party we got. After the orgasmic closure with Rock Bottom we did get one more encore in Lights Out and almost 2.5 hours after they came on stage the band waved farewell. I totally love this formula and the interaction between the vocalists looked genuinely positive with no ego crushes as long as the Black eye on stage from Chris Glen was not the result of some internal fights. Michael Schenker gives you one evening of Hard Rock at its best, with the Mad Axeman in top form. Amen. 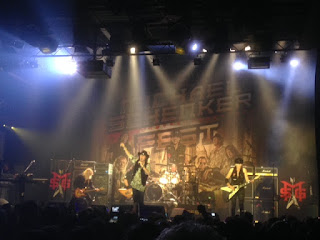