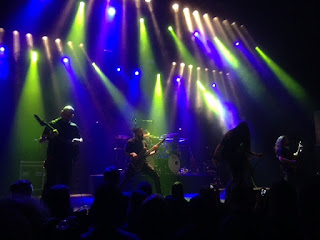 Progressive Alliance: as Holland needed a new Prog festival. This one edged more to the heavy side, but managed to get some big names on the bill.  Now I suffered from some cold this week and a late return the night before from Schenker Fest, so I would decide on the day if going down to Eindhoven would be a good plan. In comes our national cock-up company the NS who decided to work rails, which in my case meant a direct train now would be 3 trains plus a bus. So car it was and I went for the the first (of many?) edition of Progressive Alliance in healthy state as alcohol free. 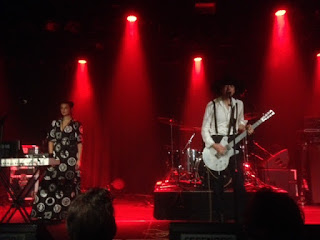 Arriving when opening band AstroSaur just started I saw a band giving us an instrumental set with the necessary energy. Yet nothing extremely different or original. Actually one of the main reasons I drove down was next band Arabrot. Now I never heard of these guys before, but what I heard on bandcamp strange enough got me completely hooked. I say strange as they do not play metal. They blend whatever they feel like, kind of impossible to describe. As that does not help let me throw in some names.  Take some The Damned, or Sex Pistols for that matter , blended with Talking Heads and especially on bass some Queens of the Stone Age. Yet when Pygmalion started some This Mortal Coil comes in. And this all brought with the typical weirdness Norwegians seem to get by birth. Paying over 10 Euro a pint does raise creative and strange musicians. When they walked the stage the weirdness did not diminish as the guitarist/vocalist looked like a beardless Amish preacher and started singing about the Gospel. He was not the only one drawing attention by looks as the tall lady in her kimono and curled hair behind mellotron would make a good DDR spy in any seventies Bond movie if being slightly bigger. Than on the right there was a small bassist who was sonically very present throughout the set. A small man with lots of hair on and under his head. They had a drummer too, but I could not see him really. Finally I did not google translate their band name, but logically it might well mean Parrot sandwich. So we got one weird set of songs being shouted and sung to us. I recognized several tunes from Who Do You Love, which I got after the set. This is dance music not for the masses, as I did not have the impression they were the biggest success of the day (quite the contrary) but for me they were a winner. Towards the end they played one song building up to a climax that made all other post metal bands that day look boring. Curious how they pick their tours and gigs being so different, but one to follow. 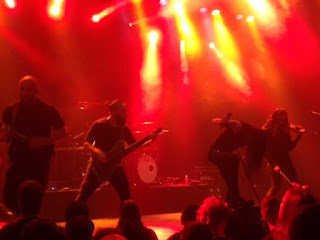 As if the Arabrot party was not enough for a good start the main hall would open hereafter as well and possibly the best band of the day would open the stage: Ne Obliviscaris. Now I saw them before and knew what would be coming, but they impressed me again in a live setting. Their mix of harsh and clean vocals over some serious tech metal works very fine. Another outstanding feature is the violin the clean vocalists picks up at times. Now he does not play that humpa stuff many folk metal bands throw at us. Neither does he solo like Mama's boys used to do in the eighties. He plays some tunes when the band go finger tipping fast over many strings on guitar and bass. I do own the last two albums of this band, yet I can not recognize song titles as I did not spend enough time reading along the lyrics with CD. Yet I recognized bits and pieces (or full songs) and heard it was all fine. This band brings nice energy on stage and plays very well. This together with the large stage just gave us a very good show of a band that would go down well at PPE I guess. 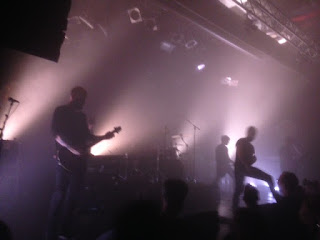 So I could return home now, but was not going to. This paid off as walking into the small hall American band Rosetta were doing their thing. Never heard of them before and neither checked them out on internet before, this was a positive surprise. A screaming vocalist was joined by a good band and brought us good tunes. I guess it was post something core given the vocals. Turned out that when a style might not attract me all that much, good playing and nice presentation make a good show anyway. Yet I did not see the last song as we previously agreed next band Vuur would be our dinner break. One fast and nice pizza later we returned to see two minutes of Vuur, which to me is enough. Now the small hall hereafter would pack as The Ocean were on next. They are growing bigger and it turned out that many people sang along with their songs. Now these people had an advantage as they knew the band already. I came in in the blind and started from zero. Than suddenly the songs were not all that different between themselves. There would be mellow pieces and heavy outbursts and this in every song almost. The band played tight and good, but I missed something or was it my back aching starting to kick in. Anyway somewhere after halfway their set I called it the Ocean and went outside. 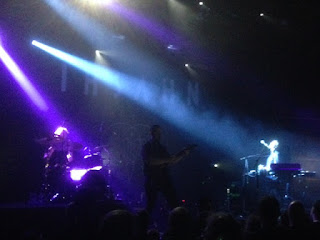 So I did have enough time to get a good place in the main hall for the last band I was coming over for Ihsahn. Last time I saw them I had to leave early getting a last train at Complexity. This time unfortunately matters would be not that different. I felt I was not top fit and two nights in a row standing on your feet started taking its toll. Also the fact that no alcohol would anesthetize the pain I decided to be smart and leave early. This meant  only saw some 30 minutes of Ihsahn and I realized Ne Obliviscaris were not the best band of the day, While Ne Obliviscaris gave the best performance jumping around the stage,  the songs I saw by Ihsahn were pure class delivery. I have a few of his solo albums and they always mix his black metal past with a family Leprous link. Pressure showed this all too well and I felt sorry that smarter me decided it was about time to drive home. So I got an abrupt end to Progressive Alliance. It seemed to me that the audience was of a decent size and of course one makes comparisons with ProgPower Europe, the mother of all Progressive Metal festivals. To me it looked that with more screams and grunts we also got a younger audience on average. The setup of one day worked OK as a start and with Vuur who played all over the country already we had a decent dinner break. Curious to see if this one gets a follow-up next year and if so, fair chance I'll be there again.