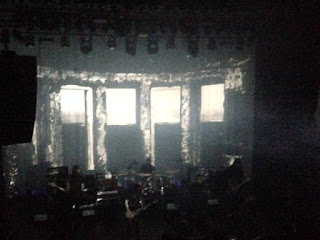 This Saturday night I decided to leave my comfort zone and step into a world heavier, darker and slower than most shows I attend. Actually this was more of a Roadburn event and a crowd to match it. Yet after reading several rave reviews on Amenra live I was looking forward to this evening. Actually it was a double event with the day before an acoustic set in a theater in Leiden. I skipped that and also did not spend all that much time at the Amenra art exposition next door. I was in for heavy music and earplugs would ever come in so handy. Upon arrival I entered the longest queue I ever saw at de Nobel, so that was a good start. 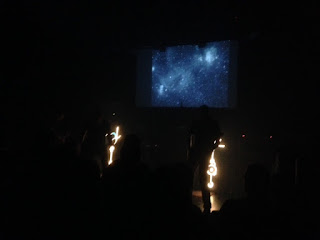 First band of the evening were Hemelbestormer from Belgium. Their last album is called A Ring of Blue Light. A Dutch band name and an English album title. Well if you play instrumental post metal, you can do whatever you want on that front. This show was in the small hall, but as I entered early enough I found a good spot to feel their music for 45 minutes. This is indeed all about feeling the music, as Heavy was used in the capital letter form. A band on stage in the dark, with on the background black and white nature movies playing. Maybe not the first time we see something like that, but this was a good band and their continued set without one word was impressive. A few times the guitarist started applauding to us as a sign that we were allowed to clap. First band down and I already felt my chest and stomach pulsing on the basses. 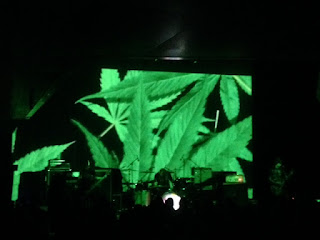 Fast hereafter to the main hall for Toner Low. Main reason I wanted to see this band is the fact that for a few years now I keep running into their drummer Jack at shows in the area. So far I always managed to be away or at other gigs when he was playing live, so that would be sorted tonight. Toner Low play Stoner Doom and when I entered the hall they were already giving us their slow and heavy tunes. Again this could go really slow and heavy and it was good to feel them live. When moving from the back to the bar at the right of the hall I noticed that in spite of the full house the bar was not that busy. I guess this music is more for smoking than drinking. Their music was slightly less metallic than Hemelbestormer, but as a plus the guitarist did sing at times and actually spoke to us in between songs, even if only a Thank you Leiden. For me music like this is good to see live, but won't work at home on CD all that well I'm afraid. 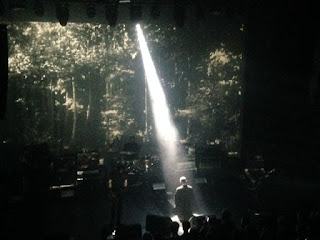 Now moving back to the small hall after seeing Toner Low until the end and getting a beer, turned out a mission impossible.  So instead of  Soul Grip I moved back to the main hall and got myself a good spot at the balconies. While Amenra exist for some 20 years now, they are a new band to me. Last year I read about them in Portugal, where Loud made them album of the month and I believe even album of the year. So that was the reason for me checking them out on the internet and I could see this might be interesting live. A few minutes before 21:45 the band came on and the vocalist sits on a cloth with symbol and his back towards us. He hits some steel pipes together and later the drummer joins him and the band starts playing. After some time we move back to the theme of the night Heavy and we get a full blow of heaviness upon us. The band were announced as Doom Post Metal Sludge, so I guess that is what it was. I must say the movies were good and the band impressive. The vocalists sung main part of the show towards the drummer showing us his back. Yet as this was a dark stage experience that did not disturb. Actually I had the feeling that Amenra is full of symbolism and their T-shirts and exposition made you believe the same. Now I don't know them really, so could not get the deeper meaning. The vocals were mainly desperate, haunting screaming, but at times fragile and vulnerable. The band was very good in building heaviness and the overall picture was beautiful. One nice view from the balconies was the crowd banging very synchronized along the heavier and faster parts. Yet I must admit I was not as overwhelmed as I was earlier this year at Bell Witch. Maybe that was also caused by the guy standing in front of smelling like a French Union sales rep after running a marathon, who  distracted the people behind him a bit. Yet in the end I was pleased with the spectacle Amenra gave us and the two nice opening shows by Toner Low and Hemelbestormer. Maybe I should keep an eye on Roadburn's program next year.
Posted by erikprogtricolor at 09:37