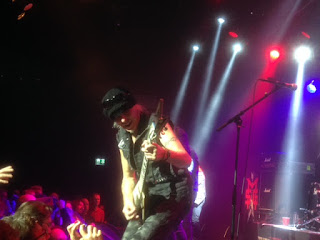 Michael Schenker Fest, bringing us three original MSG vocalists from the eighties. This together with a band mixing the rhythm section of Assault Attack Chris Glenn bass and Ted McKenna on drums plus McAuley Schenker second guitarist/keys Steve Mann. A Sold out Boerderij as a result and no way I was going to miss this. Michael Schenker is for me one of the names where it all started. Strangers in the Night is the best live album ever and his early solo albums are among my favorites as well. He was also the reason I bought my first guitar ages ago (where I never passed the stage of sloppy rhythm guitarist). As it was sold out some friends were late in getting their tickets but Peter, Joop and some of their KMD mates would be there. Going to our usual bar on the left when entering they had not arrived yet, until I spotted them at the whole other corner. Peter explained they wanted to see Schenker soloing up close and that turned out to be a wise decision. After all if there is a god and he would play guitar his name would be Michael Schenker. So for me Michael Schenker was how it all started and I am pretty sure that in the near future when I'm retired living near a Brazilian or Portuguese beach Into the Arena will still be the perfect warm-up for a morning dive in the ocean. 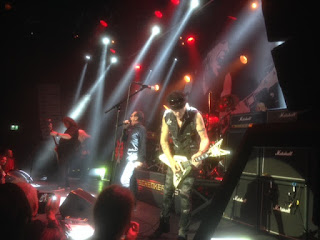 Before the party would set loose we warmed up by German Power metallers Vanish. Never heard of them before the description said power metal with thrash and progressive influences. Unfortunately during the first song someone forgot to put on the mic, so we saw a vocalist singing his lungs out but heard by noone. When that was solved it turned out the Vanish was far from the worst opening band I've seen recently. In the nineties I bought some albums by also German bands playing a similar style. Think Ivanhoe, Soul Cages or Ricochet here. Nice but not the reason everyone showed up. 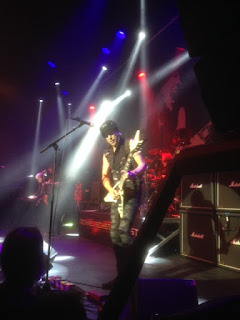 Michael Schenker coming up resulted in some tuning, annoyed expressions and some more tuning followed by a scheisse. This last one came out with a smile as Michael was very well humored today. Also as I commented the last times I saw him play he looked much better than some 15 years ago. A short instrumental for tuning it was and then Into the Arena opened the evening for real. The setup would be MSG with vocalists in order of recording.So the first one singing would be Gary Barden. In advance one of the big questions was, how shall the voices come over tonight? Well Mr Barden suffered most with the years. Actually in the eighties there were already discussions on his voice. I liked them then, but tonight he suffered.  Chorusses he left for the audience to sing and several times he lowered parts some keys to make it. Still with songs like Let Sleeping Dogs Lie, Armed and Ready, Victim of Illusion or Attack of the Mad Axeman the roof would come off anyway. The rest of the band turned out solid and it has been quite some time since Chris Glenn played de Boerderij. Actually that was a few weeks before my operation which resulted in this blog. That day I enetered de Boerderij in order to go home with terrible pains before the support even started. Would be nice to tell the doctors who fucked up my life at the time, that I can still rock hard and drink my beers. But back to the show. So we were warmed up but Gary Barden was not convincing everyone. Now Graham Bonnett was on next and last time I saw him at HRH AOR a few years ago he was not in top form either. First an instrumental break in Coast to Coast and on came the man with the tie. Well tonight his voice was so much better than in Wales. Desert Song is of course a killer, but with some help of echo Graham took us back to 1982 indeed. Well that is only 35 years back, so respect to the band. A surprise to me came in Dancer from the Assault Attack album. With Gary and Robin on backing vocals it actually came out very well. When the title track of album three followed another highlight of the evening was reached. Good to see that Mr. Bonnett was in control still and up for another instrumental break. 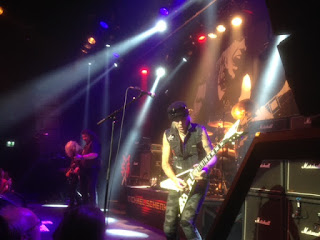 Captain Nemo is that other instrumental gem and by now we must have reached solo number 28 by Mr Schenker, watching his fingers move across the neck in awe. The third and final vocalist to come was Robin McAuley. Now there are two sides of looking at this. Back in the eighties when MSG was suddenly called the McAuley Schenker Group popularity of the band went down rapidly. The songs became more American and I believe the only time I saw this formation was when they supported Def Leppard in the Jaap Eden Hal. Now at the same time the songs played tonight were not on a setlist I've seen for a long time. Also Robin sounded and looked almost the same as thrity years ago without the very high hair that is (Steve Mann as well by the way). So I liked the adding of these songs and highly enjoyed hearing songs like No Time For Losers, Save Yourself or Bad Boys again. Robin McAuley came over that well, that it was only logical that after the MSG songs he was the one staying on stage singing Rock Bottom. Now Rock Bottom is always a peak at any UFO or MSG show, as it holds the best guitar solo ever put on record or on stage. Tonight watching Michael Schenker some two meters away going at it for minutes was simply amazing. It sounds so easy and is just one masterclass in soloing. There might be many great guitarists and some play beautifull at incredible speed. Still noone can ever match the combination of melodie, speed and most of all feel that Michael Schenker puts in his solo's and this one most of all. I might have seen it many times before, but this solo was some eight minutes musical highlight of the year again. With everyone on a high now, there was after a short break only time for one encore. So Doctor doctor it was with all vocalists sharing the parts. So good to see confirmed how Michael Schenker, my first guitar hero, still reaches levels others can only dream of. See you next tour as I will be back.
Posted by erikprogtricolor at 10:00