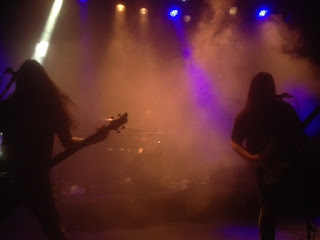 Friday 3 November was one of those days of making choices. My friend from Toner Low played in bicycle ride distance de Vinger. As I always manage to miss him live on stage, I kept that tradition going. Now de Vinger was called Bazart some fifteen years ago. At the time I went there to see Textures touring their debut album Polaris. This evening Textures said goodbye to us in de Boerderij and they brought Exivious and Extremities along. A very interesting package. Yet I recently discovered Fleshkiller and with the amazing album Awaken under their belts they would play Brainstorm Festival on the Friday. I decided therefore that Apeldoorn was the place to be. Now Brainstorm is a White Metal festival so I did not know till what extend this could be noticed in de Gigant. In the past I thought about going,  as they had amongst many others in previous years also bands like In Mourning, Swallow the Sun or Darkwater. White or not the metal can be full of grunts. Unaware of the world I would step into I did come prepared. The day before I played my favorite White Metal LP again. Barren Cross - Atomic Arena and that White Metal Maiden clone still sounded awesome after 35 years. Upon arrival in Apeldoorn I had a shoarma at grillroom Israel and in order to dress appropiate I put on my recent Fen T-shirt as it holds a church on the front. So let the madness begin. 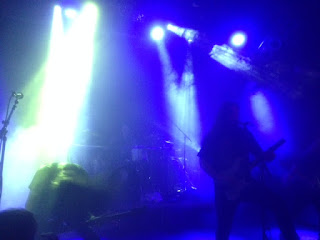 Entering de Gigant I first had a beer and passed the merch stands and saw that Fleshkiller did not bring their Goat Rider T-shirt. Looking at the CD's there were a lot of band names with bible references. Personally I do not care much about that as long as the music is good. I already knew that Within Silence had to pull out of the festival due to an ill vocalist. This was the second band that might have interested me, so a pity here. Now we had a later start and at seven The Memory Remains would open. In the program they were called a cover band playing songs by Maiden, Stryper and Priest. Well the first three songs were unknown to me so I cannot say if these were White Metal covers or own songs. I did know Holy Diver, but their alternative version surprised many. Then the happy vocalist asked who had ever been in Jerusalem, a rather strange question at a metal show. So I was hoping for the Black Sabbath song, which did not follow. The band tried to get reactions from the audience, but struggled to get any really. When we were warriors for the King and the Kingdom was mentioned a few times too often it became somewhat too white for several metal heads in the audience including me. They closed OK covering Soldiers Under Command from Stryper. 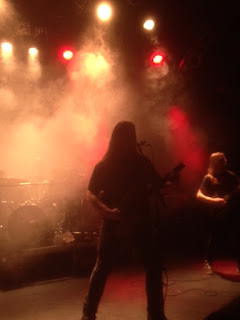 During the break I could catch up with Jeffrey and the limited Apeldoorn ProgPower representation. Turned out we all were looking out for Fleshkiller this evening. When after some open stage tuning and sounding they kicked of with Salt of the Earth matters did not sound too promising. A messy sound where it was hard to hear the guitars coming through. During next song Warfare it became slightly better in order to fall all really well together during their hit Parallel Kingdom. Finally I could hear what I knew from the CD, Fleshkiller is one of the best new bands around. While their music is to me all in similar style they spoke tonight of a ballad Inherit, a Thrash song True Image and a fast one Evil Eclipse. The mood got better by the song and my neck soarer. One of the typical essences of their music are the multiple choirs. They came out loud in the mix with lots of echo on it. Yet still I do not recall many shows where I sung along with the words "Every knee shall bow, every tongue shall confess, You are the Holy One."Well if the music is this good I am basically able to sing along with almost anything. So the mood was good and the band was getting better by the minute. Still when they asked at the end if they could play one more song, this was met with a firm no from the side of the stage. Maybe the organization could have delayed the original start a little less and granted Fleshkiller an extra ten minutes. So I was worried at the start due to sound issues, in the end it all became as sensational as hoped for. 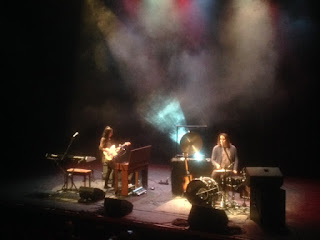 Now during the next break the Theater would see a different show by German/Greek duo Sea+Air. While during the first song I was a bit worried, it turned out we had to treat this performance as theater indeed. Actually both the presentation and the songs were rather nice. Nothing you would play at home but two people playing so many instruments together was a nice treat. After this show I was looking at the merch if Fleshkiller were around for me to thank them for their show and stimulate them to come back often. Unfortunately they were not around, so I ended up buying one of the less cool shirts they did bring along. In the main hall meanwhile Xandria were on stage. It did not take long to notice that this was not my cup of wine. Operatic vocals ruining decent music, I still don't get the fun of that. With today's headliner Project 86 also sounding not that interesting in advance and a long trainride ahead I decided it was fine for the evening. So this was my first Brainstorm experience during their 10th anniversary. With Fleshkiller making the trip down to Apeldoorn more than worthwhile, good organization and friendly people at the bar it was a nice atmosphere. The audience was decent in numbers, but quiet in noise I thought. Maybe today after the grunt competition or beer tasting they get louder. I shall not know as I won't return this year, maybe next year again. Cheers and amen to that.