Some various forms of Heavy Metal, all of them beautifull. 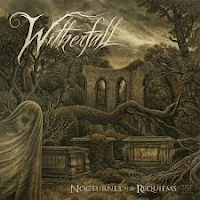 Witherfall - Nocturnes and Requiems
Witherfall is a new band with members who have been aound for some time (White Wizzard). Outstanding point of the band are the shredding guitar solo's which are all over the album and performed by Jake Dreyer. It is no coincidence that Iced Earth picked him up as solo guitarist as well, what a party he brings to us. The music goes from two short instrumentals around one minute to three epic songs of around 9 minutes each. The style should please everyone into Heavy Metal with a slight prog influence. Vocals are good too and this album should be heard by many. The sad story behind the album relates to drummer Adam Sagan, who passed away during the final stages of recordings. Cannot imagine how that should feel for the band upon release dates, but learned they have  a live replacement and even think about crossing the ocean. Should make sense as their metal goes down well in certain parts of Europe and at my home. 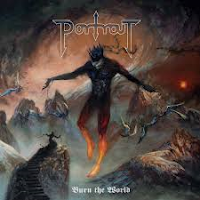 Portrait - Burn the World
Sweden is a great country with compared to their population and absurd high number of good bands. Being it extreme-, prog-, melodic-, or sleaze-metal we have some forerunners of the style in Europe hailing from Sweden. Also the good old fashioned eighties Heavy Metal with an up to date twist is big over there. Where bands like Enforcer, Grand Magus and Ram might be most famous, my favorites in that scene are Trial and Portrait. Burn the World is their fourth full-lenght and this time the band reduced to a trio. Well nowhere I can hear that, as their overwhelming music still holds all their typical elements. High shrieking voices over very fast riffs and full of solo's. If you think 1980's Denmark and their most famous metal exports you are never far away. But what a great album they delivered again, managing to make you nostalgic really. But this is 2017 and good music is still all around, proof attached. Now that both Portrait and Trial are on Metal Blade, how hard can it be to get them together and tour Europe. I shall be there with a large grin on my face. 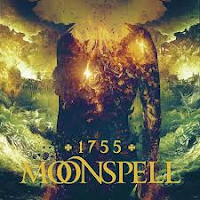 Moonspell - 1755
OK I am biased. Not owing any of their previous albums, when they announced to release a history lesson sung in Portuguese I knew I would give it a try. 1755 is the year Lisbon faced a huge earthquake, resulting in tens of thousands people dying. In order to express the emotions on this dramatic event Moonspell is keeping it all Portuguese. With my frequent returns to that city (and loving the place)  my interest was bigger than normal. Of course we need good music before switching to actually buying this album and also there no complaints from me. With a topic like this drama is omnipresent of course. Now this could be translated in complete over the top songs and production, but somehow Moonspell for me manage to stay away from the cheesy parts. Actually even the latin quotes fit in fine. At the same time this is a heavy album, with voices aligned to that.   So for me the surprise of the month and as a bonus a surprise ending. A cover from Paralamas do Sucesso a Brazilian pop/rock band Josie likes, although I did not know this song. Early February live in Holland, check!
Posted by erikprogtricolor at 17:41