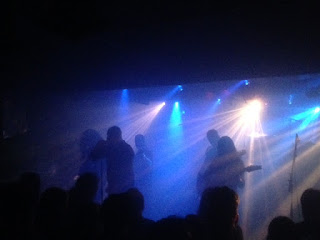 While these two bands headlined the second day of Dutch Doom Days in Baroeg I thought refering to the festival when seeing only 2.5 out of 12 or 14 bands inappropiate. They were also the reason I made it to Baroeg. Cycling through the rain in a fast getting colder Holland on the first day of winter time. Well this was to be the soundtrack for darker days ahead of us. When entering Baroeg Hooded Priest were on stage and what I saw was very nice on the presentation side. They do have a remarkable vocalist with the necessary presence on stage. The music was doom, but some heavy metal whoo-hoos entered the mix. When Saturnus started however, the musical performance went to a whole other level. There are so many bands around that you simply missed because you are not an insider in certain scenes. This show simply blew me away. around 75 minutes of long epic songs, where the heavy mood was always present and long melodic solo's were played over heavy rhythms. Vocals were mainly grunt and occasionally close to speaking/whispering. What in the end mpressed me most was how they managed to keep everyone sucked into their show and de Baroeg was for the 75 minutes a wave of slow banging heads. Atmospheric metal with an attitude, with only one small intermezzo when the vocalist rushed to the toilets during an instrumental break in order to come back just in time with a relieved smile on his face. Willing to get some of their music I ended up with Saturn in Ascension, their last album holding two songs I liked and remembered Wind Torn and Forest of Insomnia. Great band and as their last album dates from 2012 maybe something new is on the way slowly but heavy. 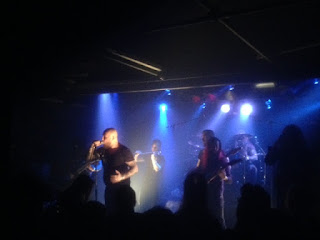 With a great evening already guaranteed by Saturnus it was up to Clouds to close the festival. Rene already explained to me that they are an international all-star band, who recorded in different settings. During this show they had three guests on vocals therefore. While playing doom, they sounded completely different from Saturnus and actually sounded rather different between their own songs as well. The first song reminded me at times of Anathema around Judgement days. The violin for added depression helped on this. Vocals also mixed with more clean parts in their songs. Later on at two songs I was strongly reminded of Green Carnation, whereas during heavier moments Doom/Death was around. All in all this show turned out as impressive as Saturnus. Trying to get also a CD from them after the show failed, as they were sold out already. Once again going to live music was rewarded with two bands playing above my expectations and bands to follow from now on for me. Never before Winter Time started as adequate.
Posted by erikprogtricolor at 09:53