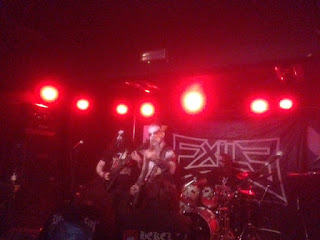 Iceland a country with a population of today only 336.082 inhabitants (Worldometer). Yet they manage to qualify for the World Cup and release a large number of heavy bands. I like their most famous musical exports Solstafir and Sigur Ros, but tonight's bands were unknown to me. The evening was opened by Dutch Black Metal band Adversarius. Unfortunately they started before announced kick off and when I just arrived Rene tipped me on the shoulder. This to introduce me to the NWOBHM legend who was in the audience with his wife. Well I knew that in advance and was looking forward to meeting them, but did not realize they had to leave early. Well more on them next year I hope. 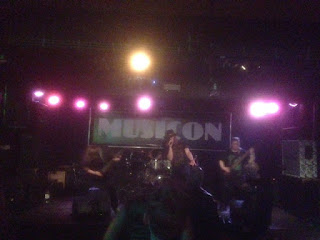 So the first band I fully saw were Devine Defilement. That was a nice surprise as they played a mix of very fast music, with  a good vocalist introding the songs with a dry sense of humor (scandinavian). Not sure how to describe their style, I leave that to people who understand more of music, I did see a good band. At one stage the guitarist was riffing so fast, that you could not see his hand any longer, just a bandwith of hand amazingly fast racing the strings. The vocalist did jump into the audience twice and walked through the nicely filled Musicon, actually scaring Patrick at one stage. Good band to kick of the Iceland experience. 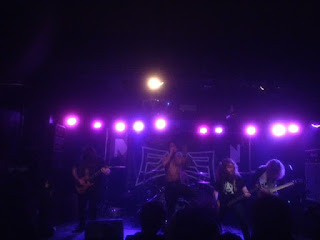 Next on Exile where a whole different lot. They turned out to play heavy metal in traditional setup with two guitars. Some good songs as well, although the vocals and solos not always came over loud enough in the mix. While they were described as thrash metal, I was more reminded of some Heavy metal bands, than typical thrash giants. A nice change in styles over the evening thus. Final band this Friday were Rán. According to their FB page they play heljarmetal, mixing black and thrash. They do exist for ten years now and you could see that back on stage with their solid show. Painted black metallish they did mix other styles in. When they dedicated one song to Rob Slors this was met with a large roar from the crowd. I believe their vocalist lived in The Hague so he knows his local metal history. The song that followed was Black and Roll style and went down nice. You could see why this band closed and it turned out to be very worthwhile again diving an evening into the unknown. This weekend the Icelandic Metal Assault is hitting two more dutch cities, strongly recommended I'd say.