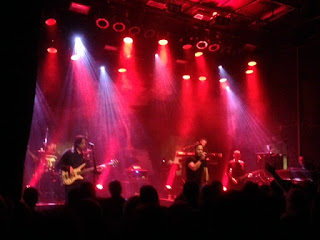 Threshold released this year a great new album in Legends of the Shires. Over Christmas I can worry about the limit of 17 albums for my best of 2017. This month they make a small European tour to support the new album. 9 December this package passes close to home at de Boerderij, but I can not make it that night and Hans will be in London that weekend. So the alternative for us was attending the other show in Holland in de Bosuil Weert. Now Holland is sick as it took 3.5 rush hours to reach Weert (2 hours return), so the Weert dinner went short with us entering de Bosuil just in time. Now the big question of the evening was of course how would the new old line-up perform on stage. Before we could answer that we had two supports. 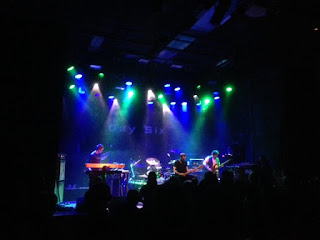 First band were Day Six from Holland. Actually one of the better progmetal bands around in Holland. Both Hans and Willem pledged their new album, but I never saw them before. The year they played Progpower work sent me abroad and when playing nearby I always found an excuse not to go and see them. So how did I like them? well pretty good actually. What I liked most was the at times aggressive riffing which gave some banging feel to their music. The songs themselves were to unknown to me to stand out by themselves. So I did not get their CD yet, but will one day listen online. 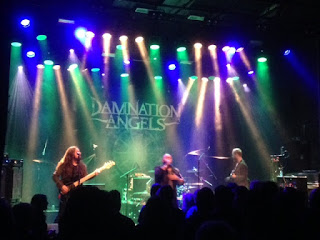 Damnation Angels from the UK followed. On a recent Threshold tour they were also support and I recognized the thoughts I had that night. Positive were the energy and enthusiastic presentation. At the same that enthusiasm resulted in too many requests for clapping or shouting along, which turend out no success all night let alone for the unknown support. Their Progmetal is more Power metal really with traces of Helloween blended in. This brings next to the participation requests some cliches with it, like orchestration and backing vocals coming from a tape. Through the set they gained some more support, still not that many fans won over I guess. 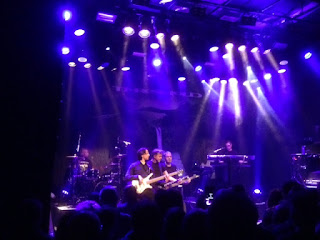 And then we waited for Threshold. This time without Damian Wilson walking through the crowd in advance, nor Pete Morten on guitars for the double guitars. They both were swapped together against one Glynn Morgan singing and at times on guitars. Now he sang in the nineties on Psychedelicatessen, one of my favorite Threshold albums. I found in a drawer my T-shirt of that tour so in support of Glynn I broke the unwritten rule and actually wore a T-shirt of the headliner playing that day. At the same time that T-shirt also reminded me of my worries. During that tour I saw three shows, or better intended to see three. Due to Glynn having throat problems two got cancelled, which we learned at the venue (pre-internet days). Older and wiser now he would take care of his voice and the album Legends of the Shires already sounded very promising. So what did we get in the end with the renewed Threshold live. Well as always opinions divided. Hans thought that Glynn was a bit too uncertain in his presentations and did not manage to work the crowd. Willem thought they did improve as live band from last tours and I agreed a bit with both. Advantage and problem with Damian Wilson was that he was a bit too much an attention seeker. This resulted at one side in a participating crowd always, while at the same time half the audience thought he could tone down a bit. Glynn definitely is no attention seeker, but at the same time the Tuesday night reasonably large crowd also did not make matters easy. What did come out as winner and gave an overall positive feel to the evening to me was the setlist together with the performances. The whole band was in topform including sick Karl Groom. Yeh he looked pale, but he is a brit in November. Actually being sick was hidden well for me. Watching Threshold (or Kyrbgrinder) you have to wonder why the buzz about Johanne James as one of the best drummers around is not bigger. He always makes his own sideshow and his playing is flawless. While passing their whole career the Damian Wilson albums were limited to one song: Ashes. Still I had no complaints, with after the obvious focus on the last album classics Pilot in the Sky and Mission Profile being played. Psychedelicatessen got two songs only, but this included their uberhit Innocent. Interesting to see how Glynn felt somfortable playing his own song. During the set he felt more at ease anyway it seemed and his voice never disappointed. So when the encore was done with two Legends songs and a tape of Swallowed was played we could quickly resume before our return.  I saw a band in topform, with in his own style a sympathetic Glynn Morgan on vocals. And even better I got to sing along "Take my Life Away, or give back the answer you hold"!!
Posted by erikprogtricolor at 18:22