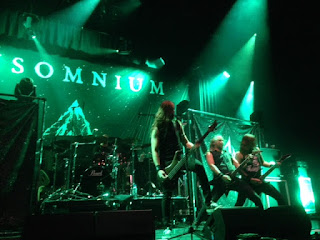 This tour went under the MTV Headbangers banner and was headlined by the Cavalera brothers, playing Roots. In the past MTV actually played music clips and had a metal show, before they turned into this shitty-16-pregnant-wanna-shag-get-a-tattoo-supposedly-reality-channel. I do not recall seeing Headbangers Ball too often as I believe they put it on hours when you would not watch television really. Still it existed and some sort of promotion for bands was there. The last years they put on a tour through Europe by the end of the year mixing metal styles. Now I probably was amongst the people with most Brazilian Roots in the audience, but detoured trains and a Sunday night made me leave the Bloody Roots for what they are and concentrate on the bands I really wanted to see Insomnium and Overkill. I did not go to TivoliVredenburg apart form the old main hall untill a few weeks ago when I went to see Sinistro and Pallbearer, supporting Paradise Lost. Tonight I again did not come to see the headliner and in two weeks brilliant Scar Symmetry are supporting overrated Vuur. I see a pattern in the programming in Tivoli, where the cheapest beer still goes at Eur 3,70 and doors tell you to push or pull only in English. 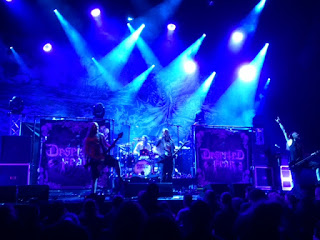 Entering Ronda it turned out to be a beautiful hall with a wide arena and a balcony and sort of football stands at the side. It was not too busy when German Deserted Fear started their Death Metal gig. They actually did so very nice and their playing and presentation came over well with those who arrived early. Interesting that even the opening act was allowed a huge banner and a slot of 40 minutes still. Unknown to me on forehand, but I will go and see them again when playing in the area. As the merch was before the entrance, you were not tempted to pass it between shows, so I do not even know if they brought CD's. 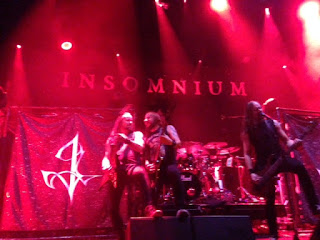 Next band Insomnium were the reason I went to Utrecht in the first place. They played the first show I attended this year in Biebob and that was one night to remember. At the time they played their album Winter's Gate in full and it was just astonishing. Touring some festivals this summer they still put the focus on that album. So for this tour they had a change of plans and played a best of set. Well that did not change matters dramatically to me, as they are just a very good band, mixing the death and the melody perfectly. Even the alleenstaande vandaal (sorry English readers look that up on Youtube one of Holland's best ever comedy clips on TV) next to me, could not take me down to earth during this show. Not hard with songs like Shadows of a Dying Sun coming over you. While I watched this show from up front I had no clue how busy it was. During the next break I heard from some friends they were not overwhelmed by them. I guess that is the point of Insomnium, they mix death and melody to the max. This means that they might not be brutal enough for Death Metal purists, nor clean enough for melodic metallers. I personally love this mix and saw another great gig by them. 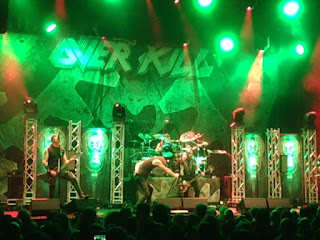 When Overkill started it was easy to see why this band should attract everyone into whatever style of metal. The sheer energy coming of the stage is contagious. You get swamped into their show and stay with a grin on your face watching a very tight band bulldozering over you. For added pleasure Bobby Blitz speaks Dutch which gives the show some humorous intermezzos. "Ik hoor je niet", "Hebben jullie je schoentje gezet?" or "Mijn Brabants is beter" went down well with the crowd. If you then take into consideration that some classics like Rotten to the Core or Hello from the Gutter pass by, it is clear that we had a winner,. Not seeing anything from the Cavalera brothers I doubt they could top this. When early in the set I spotted Michel and Esther at the stands on the other side, I joined them. Turned out you have a very plesant sight at the stage from the side of the hall. We also could see how the alleenstaande vandaal kept on breaking all the rules of the moshpit until security sent him off under applause. Looking down on the arena it seemed to me that the evening belonged to Overkill and all agreed when they closed with their hit Fuck You, tonight changed into Flikker Op. Great band who proved once again that focussing on the so called big four, only makes sense to those not getting the point. I had a good Headbangers Ball and even made it home with some detours due to scheduled maintenance work. As this was the first show of this tour I can recommend to go and see them when in your area. Come early as Deserted Fear made clear they deserve that. 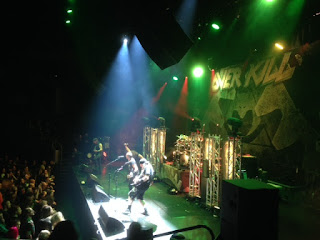