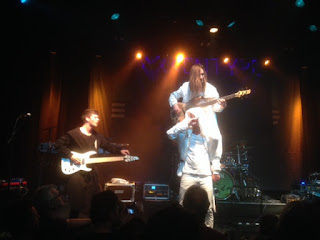 Three different types of progmetal, of which two bands coming to support strong recent releases. Enough reasons to head to de Boerderij on a Friday evening. I was not the only one as de Boerderij was nicely filled up and the Progpower community was represented well. Opening band Arkentype was the one I looked out for most. This because I really like their debut album Disorientated and I never saw them play before (which made sense as this was their third show outside Norway they told me later). The band came on in black and white. This meant all four members wearing boxer like hooded coats either fully in white or black. Next to that the guitarist and bass player were more than a bit hectic on stage. These were the ingredients for an amusing show, with enough happening on stage. Musically I was helped by knowing the majority of the songs and recognizing big parts. The sound was not ideal and especially in the begin the guitar and bass were not overly present. The guitarist had seven strings on his guitar, but did not use them for showing of in impressive solo's. He mainly stuck to Djenty riffing. The bass player was smiling a lot and a a certain moment walked through the crowd. It was funny to see how he disappeared in a group of Class of 1985 shirts all banging around him. Arkentype seemed to be a band finding their way still stagewise. They told me that they like to have things going on while performing. I did much appreciate their show and am looking forward seeing them again later on when they have gained more experience. And yes I liked the new song, as soon as the arabic opening bits were finished.

Next on were Special Providence and they really turned out to be not my cup of Szilva Pálinka. I am better at home at Hungerian Alcoholic Beverages, than I am at Jazzy, Fusion, Prog, Metal Instrumental music from Hungria. I could also see that this is a talented bunch, but after Arkentype's ADHD performance these guys were standing very still. After two songs I moved to the bar, where I could hear them further having nachos and a beer. I could see them too on the big screen, but seeing them standing still is really not their selling point. 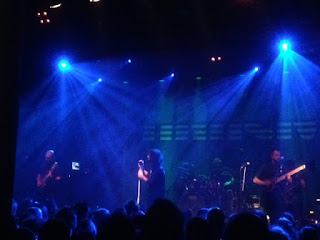 Then we waited for Haken's return to de Boerderij. In the past I saw them amaze me (Progpower, Night of the Prog) and later due to high expectations underwhelming slightly (touring with Headspace). When touring the disappointing Mountain my expectations went down and they positively surprised me again. Now that Affinty is one of this year's better releases they could only disappoint following their pattern. Well disappoint they definitely did not. Haken is nowadays a solid Prog machine. Maybe slightly less metallic, but a great show they always give us. As Haken is a band developing between albums, my personal problem is that I like the first album best. "The Point of no Return" and "Drowning in the Flood" are probably my two favorite Haken songs, but I doubt if  I shall ever see these two coming by on a live show. Now the focus was obviously on last album Affinity and the Mountain. In "1985" and "The Architect" we have two great new epics, which turned into instant highlights of the show. Regarding the Mountain I swim against the stream of most fans, but Cockroach King really does not do it for me. These things can happen (Pain of Salvation's Disco Queen has this controversy at much higher levels) so I did enjoy a good performance of Haken 2016. One thing regarding their first shows I noticed that live the departure of Thomas MacLean is a bit of a loss. He was always very present and a modern prog band with someone not wearing a beard nowadays is refreshing as well. Haken definitely arrived at the top of Progmetal/rock Premier League and I wonder if they can bring it to the next level. I guess their music is too complicated to bridge mainstream, but seeing them for the next years in a packed Boerderij is no punishment really. As I had to catch a last Randstad Rail, I left during Crystallised. Just reading I missed encore Celestial Elixir, meaning they did not forget Aquarius completely after all.