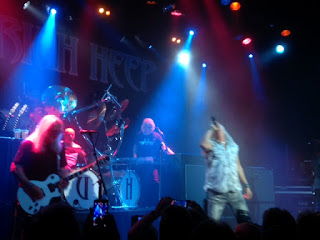 Uriah Heep is one of those bands with a great past, occassional new albums and frequent tours. They tour Holland every year and I am not showing up on each and every tour. Last time I had seen them live was quite some years ago, so I decided to go for an evening of Classic Rock. This also helped by the fact that I met Onno and Mario at Mick Pointer Band and during the welcome home BBQ of Marcel. Both were rather positive about the Heep and especially the new drummer brought a lot of enthusiasm and power. A good thing about going to an Uriah Heep show is that you suddenly are around average age again. The first time I saw them live was in 1985 on the Equator tour in Arena (at the time this was still a club in Rotterdam and not a football stadium in Amsterdam). That was with Peter Goalby on vocals. Yesterday there were also several people in the audience who probably have seen them live during the Byron years. Don't think it was fully sold out, but it came close. With no supporting band this would be almost two hours of classics and even an early rail home. 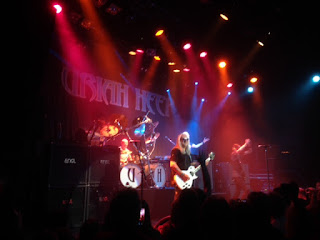 The show opened with Gypsy and immediately it felt like I had not missed them over the past 7(?) years or so. Mick Box still wearing his bright smile and waving his hand got you immediately in the mood. Also it turned out that Mario and Onno said nothing too much with drummer Russell Gilbrook being very present doing justice to the Animal sign at the side of his drums. Bernie Shaw was soft in the mix but good voiced so all ready to go. Following up by Look at Yourself the past was present. During the show also 4 songs from last album The Outsider would be played. Although sounding good, they did not have the same impact as the songs everyone knows for some 40 years now. The set was build up fine and actually not much can go wrong with Stealin', Sunrise, The Magician's Birthday, The Wizard and my Heep favorite July Morning on the list. After about 100 minutes we were done and one encore followed in their biggest hit Easy Livin'. The only minor comments would be in some of the lyrics. Starting ballad Rain, with "It's raining outside"  can happen. Yet during new song The Law we were ordered to "take the law into our own hands". This might be less appropiate in times of terrorists attacks, Trump speeches and Erdogan disturbances. Still counting on an average Heepster being smart enough to seperate matters. in the end I was very pleased to see the latest version of Uriah Heep. It is always nice to see timeless classics from your youth being brought live. Further it always reminds me that Uriah Heep are among the founding fathers of melodic hard rock, inspiring later favorites of mine. With temperatures as nice as last night it felt like  There I was on a July Morning, Looking for love. With the strenght of a New day dawning and the Beautiful Sun.
Posted by erikprogtricolor at 17:11