One week before they play de Boerderij herewith a heads up for two great recent releases: 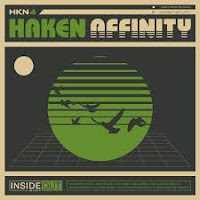 Haken - Affinity:
Haken were hyped by PROG magazine before releasing their first album Aquarius. After hearing the debut and seeing them at Progpower and Night of the Prog I fully agreed with the hype. This could be one of the great hopes pleasing both progmetal as well as progrock audiences. While very interesting their music definitely requires some time spend and is not for all. Especially the freaky bits scare some people off. Second album Visions was in the same vein and much appreciated by me again. They really broke bigger with third album The Mountain. For me this was a dangerous move, as they turned less metallic. Therefore I was more than a bit curious how they would develop on their fourth album. After many plays I can say they found the way back up again. The songs work better to me then on the Mountain and the whole album seems more cohesive. Central piece "The Architect" is 15 minutes long and even brings back a few grunts. Further it is interesting that the cabaret parts that nerved some in the past almost disappeared. So I am looking forward how this comes over on stage next week, counting on the best and a bit. 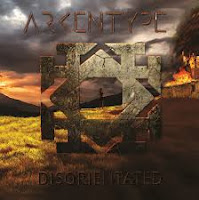 Arkentype - Disorientated:
I do not know Special Providence and Rendezvous Point skip the show in Holland. But Arkentype shall open and I am looking very much forward to this band. This CD sees them blend various styles from Djent, to progressive rock and haunting female vocals. Obviously heavier than the headliner, they shall take care of our metal needs. With a blend of styles it always is hard to specify a band, but they in many parts remind me of Ram-Zet. Also Leprous in their heavier form comes close at times. I think this can be one big surprise to many, as I immediately loved this band after hearing their debut. Disorientated they do not seem to be at all to me, just all over the place and heavy. An early arrival next week is a must now.
Posted by erikprogtricolor at 12:24