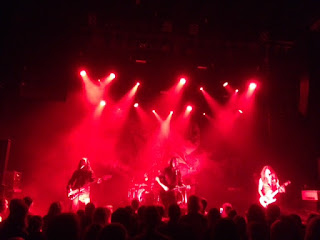 Evergrey just finished recording their new record in denmark and in order to blow of steam they went to Holland and Belgium for three weekend shows, starting of in Leiden. In order to get here they passed 10 hours in a van. We shall never know what they consumed during the trip or upon arrival, but fact is that Mr. Englund was very talkative and jokingly today. Before Evergrey started their early show, we were warmed up by to me unknown Dutch band My Propane. They played a groove based metal, which had especially the bass rhythm determining big parts of the sound. Not overly technical or filled up with guitar solos this was nice warming up music. Actually we did not need much warming up, as Evergrey picked the sunniest weekend of the year and even bermudas were an option. 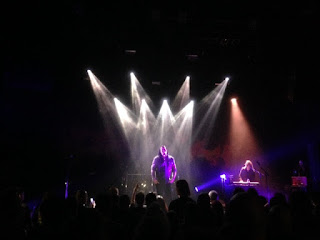 When Evergrey started we were treated through keys and drums plus samples on a good opening. This one followed by one of their classics Recreation Day. Let me first explain my knowledge of Evergrey which results in not too many songtitles following. First time I saw them was at Progpower 2000, when a leather skirt was the item I remembered most of their show. In 2005 they played the coldest Aardschokdag ever when large queues were in front of the coffee bar. I also once saw them in a club when Mercenary at their career high played 11 Dreams and took most of my energy. So I do know them (have the DVD) but not so many albums. Still their style is such that you immediate recognize the music as Evergrey. Also by first hearing the songs go down very well. Due to the very relaxed atmosphere during the show, this might actually have been the best show I ever saw from them. Songs as The Masterplan, Obedience and a Touch of Blessing (that were the songs I recognized and remembered as such)  came over very well and the long set flew by. When the bass had technical problems, we got a very nice keys/vocals only ballad, where hands went even in the pockets as total sign of can't be bothered too much. The evening started early, as students would take over the place later on, but we got an afterpart in the small hall. I believe that when the band showed up and connected a phone to the sound system we were treated on a new song. Too bad I could not tell since I heard many new songs over the evening. Still they convinced me with this show, that I might need to look out for their new album when being released this autumn.
Posted by erikprogtricolor at 15:47