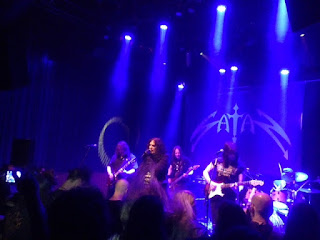 Doomsday Celebration in Leiden. Last year we got NWOBHM band Hell with some 9 other more extreme metal bands. This year the roll of headliner was for Satan with only two other bands on the bill: Batushka from Poland and Gnaw Their Tongues from Holland. The last one started and the only word I have to describe this is weird. I simply did not get this. One 5 string bass a computer and some buttons. The vocals were shouted to the roof and I actually did not know  what the couple behind the desk were doing. They call it Black Metal Avant Garde Filth, but I just did not get the point so stop here. 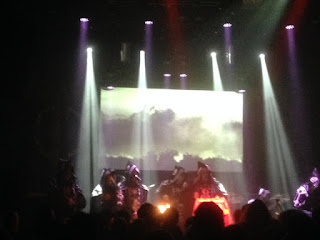 Personally I like these line-ups with different bands as I came to see Satan, but would see what the other two would bring. The audience was also equally split in younger Black Metal fans and older metal fans. Many of the younger generation came to see Batushka. While the opening band was strange this was also not your daily cup of tea. 8 Poles appeared on the small stage dressed in Black symbolized robes with hoods, covered faces behind grey masks and two stands of candles. Apparantly the members are known names, but do not disclose this (where did we see that before). It took them over 5 minutes before they actually got started and the silence created a gap and general jokes on what was going on, or more the lack thereof. Then one guitar started and we got some black metal with a very strong presence of three gregorian choir backing vocals. On a large screen behind them beautiful black and white movies of nature and old people were shown. This was like going to a service in church and not a rock concert really. This also helped by a bible like book exposed centre stage on a table. The music was Ok to me, but the Gregorian vocals bored me after a few songs. Also did I not see lots of differences in dynamics, which made it all look a bit similar. The success of the band was not small though and those who came to see them seemed to be enjoying themselves. 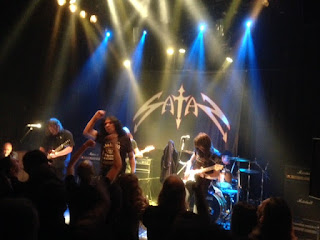 With a few people leaving already, the old guard went up front when Satan came on stage. Starting off with Siege Mentality and Incantations both from the Life Sentence album. The difference could hardly be bigger to me. Here we had a band playing good old fashioned uptempo NWOBHM, who were enjoying themselves and the crowd. Suddenly we had a vocalist who introduced songs with a sense of humor and not taking anything overly serious. The band was playing fast and one song after the other was shot at us with full enthusiasm. Most interesting I found that Satan does not rely on their old work to make the audience happy. Actually their classic Court in the Act got far less songs played than both recent albums. For those who do not know their metal history Satan used to be huge in Holland in the early eighties. The best description of this you can read in Mark Gregory's brilliant book "No Sleep Till Saltburn" where he joins them to Holland for a show in the Dynamo. He was surprised by audience reactions and 5 encores played that night. Tonight we got Trial by Fire and Blades of Seel halfway the set. This resulted in a pit on the sticky beerfilled floor. As Brian Ross mentioned before the interesting point was that several of the more fanatical moshers were not even born at the time of release. The show flew by and it seemed there was some time pressure when Satan did quit after an hour or so. The music started in the hall, but luckily the band did come back for an encore in the form of recent songs Testimony and The Fall of Persephone. I did get the impression that these were real encores as in not fully scheduled. Satan gave us a great show this evening. The contrast with the two previous bands was mainly in the enthusiasm and pleasure in performing. Respect that their show was not even close to hanging on to the past. They are very right as Atom by Atom leaves nothing to desire for and is as strong as Court in the Act. We forgive them the 28 year hiatus and hope for many returns in this form.