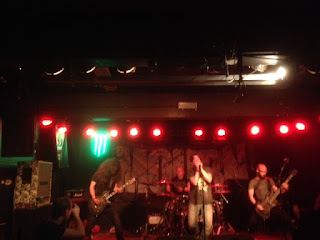 As I can't make it to Musicon today herewith the first review of this festival although limited to the Pre-Party only. For the history of this festival I suggest the interview on Lords of Metal with organizer Dennis Kuiper. When reading that I looked back to find why I did not go last year and found it fell together with Doomsday Celebration in nearby Leiden on one day. While Saturday goes to the heavier extreme end in metal on Friday we got groove and heavy metal by 4 bands. Opener Mullet I missed for the biggest part. Upon entering they covered For Whom the Bells Toll pretty good and closed the set with a jumping song in Dutch about Automatic Pilots and Beer. As they are from The Hague I might see them soon again for a full show. Next on were Skullsuit a band playing groove metal. They played well, but lacked some variation to me. While saying that, the last song offered more on this front. What did look great were their banners in front of the stage,  some time and work obviously spend on logo's and artwork. Mourn brought some familiar faces. Vocalist Pieter Verpaalen sung on Textures' debut Polars and bassplayer Robin Zielhorst I saw playing with Cynic and Exivious before and also is member of Our Oceans. Our Oceans music is nowhere close to this band and also Textures and Cynic were not omnipresent. Given the mainly screaming vocals they were the heaviest band of the evening. I quite liked the songs and the groove that lay behind them. I read they are recording a debut album now, so expect them back as well. I shall go and see them again when in the area. 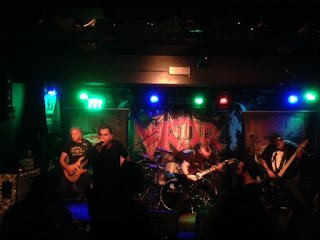 The evening was closed by Martyr a band that needs no introduction really. Martyr live is always a party and tonight would not be much different. Since the eighties they play heavy metal and bring a smile on your face watching them doing so. Vocalist Rop van Haren likes to sing between the audience or directing the audience on the stage. During two songs we got some 20 people on stage and as always the mood is great during a Martyr show. I always feel that they understand very well what it is all about. People come to enjoy themselves, so they push and pull until we are all in the right atmosphere. Martyr is good on CD (got their last one "You Are Next"yesterday) but they are brilliant on stage. Perfect closing act for any festival like this. So I hope today is a ssuccesfull as last night and also that I can attend both days during the next edition of MetalCon. 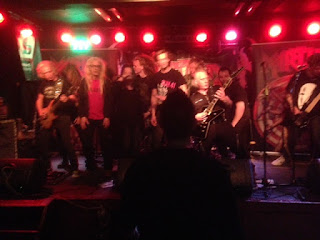