With my recent trips to Portugal and digging somewhat into the country's music scene, it was obvious that I had to stop by Musicon when two Portuguese bands passed on their European tour. As these two Portuguese bands come from a warmer climate, maybe some explanation on what happened in Holland last weekend apologizng fairly small audience numbers. This was the first weekend with summer temperatures and when that happens the mood swaps completely. Everybody goes out looking for the sun and beach plus BBQ's are on the menu. This starts Friday after work and means that by Sunday evening many are exhausted and collapse on a couch or bed. Also I did not manage to get the interest of any of my friends through the concerts app, but that would not stop me and I turned out to be very right. First band was Vircator from Viana do Castelo. They play Rock from Outer Space according to their page. Well whatever the name, they play great music. What I loved most from this band was the huge dynamics in their music. Starting of on a riff in general we got great buildups to expxlosive instrumentals, where the members fanatically walked in big steps over the stage. They proved once again that some bands don't need any vocals as long as they know how to work on diversity. Very sympathetic on stage this band presented us their new album "At the Void's Edge" in full. When talking to their guitarist after he show, they even had to pick a copy backstage for me to buy. It turned out that this wa stheir very first European Tour and they were happy to make it to so many countries. This band alone made the evening a succes already to me and just playing their CD now, it shall be one to follow. I even learned that ther closing song was not called be smooth, but _Bismuth. Another advantage of instrumental bands, noone really has to get the titles of the songs. 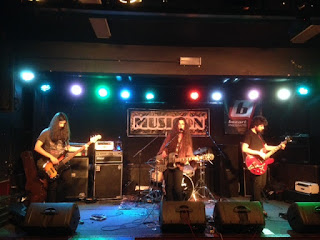 After a short break we got The Black Wizards. Their music is called Heavy Fuzzadelic, which means a trip of some 45 years back in time. Apart from their music their looks also were timeless. the quartet has two women in the band and the drummer won my sympathy when  she covered a broken string by a nice solo (or was that planned?) and when the band was offered drinks she made it clear that her beer had to be transfered to the back of the stage. This band also played very tight and had some great hard-soft swaps in their songs. At the same time, when hearing both bands in advance on bandcamp I knew that Vircator was closer to my usual taste. The Black Wizards turned out to be a great live band and if they play Portalgre when I am around I shall definitely see them again After their show I did not wait to speak to them as Tiago's BBQ was taking it's toll and the weekend was warm. Still one tip to both bands would be to promote their T-shirts and CD's a bit more openly. I saw today the designs of both on internet, but in Musicon they stayed hidden backstage. If temperatures would have dropped another three degrees I would have needed one to cycle home. Thanks to D&ESR for this great event, and when bumping into a flyering Toner Low member for two days in a weekend I shall make an effort to see them later this month as well.
Posted by erikprogtricolor at 13:39