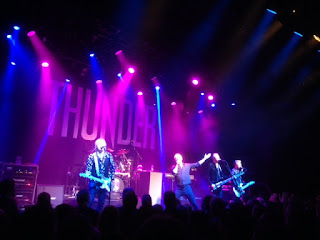 Thunder back in de Boerderij is a matter of why not go and see an evening of feel good music. Actually Thunder's melodic hard rock would fit better on the beach at Schollenpop than on a dark winter night. Still de Boerderij filled nicely with an open balcony and just space enough for easy walks around without fighting through the crowds. I follow Thunder as such, but not extremely close. I have several CD's, but not all and seeing them every two years suits just fine. Their last album Rip it Up I only heard once, flying KLM for work. It seems that my years as frequent flyer suggesting more hard rock on their entertainment system resulted in some advance, as I was surprised to find Thunder as an option, 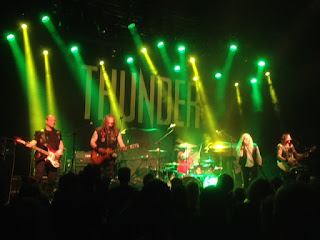 First band of the evening was Lovell's Blade. This band contains several ex-Picture members and plays actually a style slightly more melodic than expected. I saw them before at Very 'Eavy and again they sounded fine, but their songs lacked a bit of urgency. It all passed by smoothly without too many attention seekers. When they played their last song Out For Blood I thought they were at their peak of the set and we could have had more of those ballsy songs. Good not shocking was my ordeal therefore. 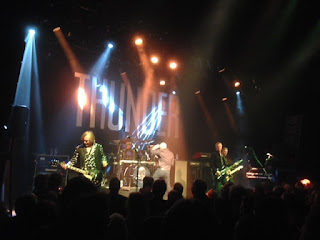 Thunder on stage is always a guarantee of good playing. It also amazes how the voice of Daniel Bowes does not show signs of aging whatsoever. He definitely is one of the best voices in melodic hard rock, while every tour he starts looking more and more like Bert van Marwijk (Australian not Saudi coach at World Cup). The rest of the band is also tight and the solo spots for Luke Morley are to me the highlights of the show. This evening it seemed to me that Thunder overdosed a bit on the ballads. Only occasionally they went for uptempo rockers and most songs had calm guitars with the beautiful voice of Daniel over it. Astrid was right calling it Ladies'night this evening. If I see that Ron and Hans were not bothered joining Astrid and Mary, plus the large number of women in the audience, she was probably right. A Thunder set for me always had three good guarantees, of which one was skipped tonight. So we had Backstreet Symphony and their ballad hit Love Walked In. To my surprise no Low Life in High Places tonight. Yet a mix of old and new songs. In advance I was hoping for one of my favorite Thunder songs of all time to return in their set tonight after a long time, as the topic became relevant again. On their album Behind Closed Doors from 1995 they had a powerfull song on a very sad occasion in "It Happened in This Town". The song told the true story of two 10-11 year old boys killing a small child. Now recently I heard on the BBC that one of them was recently arrested again for sexual assault. That song expresses the anger and frustration and is an alltime classic. I do understand that this dark story does not fit in an evening of positivism that is a Thunder show. So in the end the playing was flawless. The request for clapping and oooh-oooh or naa-naaa-nananaaaah a bit too much and the songs good. Thunder plays to make people feel good and they managed to do so again.
Posted by erikprogtricolor at 11:16