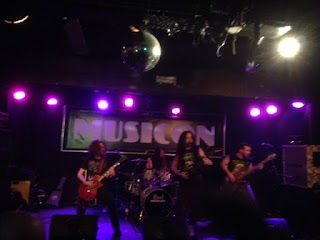 The year is starting Dutch for me on the concert front. After last week's surprises by Vexation and Moonstruck I was going to Musicon to be surprised again. Well openers Defazer were not much of a surprise as they played a lot in the area the last years. The FB event only said that if you don't know them and are from The Hague you must have been living under a Rock. True that is as they are the best old school thrash metal band from the region (country?). Last year they released their strong EP Order Out Of Chaos, so by now we can recognize some of the songs. To me it seems they are getting tighter every next show and we really were treated on some top class thrash metal. Only during the last song it started as if all four decided on a different closer of the set at first. When this was corrected  they finished in style. For those not knowing them yet, check them out. 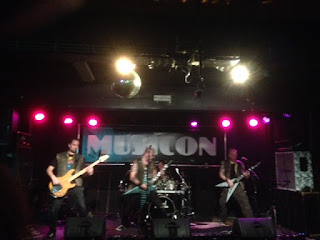 After the homematch of Defazer, with a musical style I am fanboy for 35 years it was time for new bands and less introduced styles to me. First one was Deformus a band hard to describe. Now usually this is a good thing and tonight it was partially true as well. Binding factor to me sounded their groove which was omnipresent in all songs. Further there seemed to be a metal blender in place as we got bits that were thrashy, death metal or whatever I could not put a finger on. As we do not live in an ideal world not all was perfect and for me the tempo could have been a bit faster at times and the vocals were both not overly exciting. Still musically some interesting parts mixed in, curious if they develop into a certain direction from here or stay rather wide in styles. 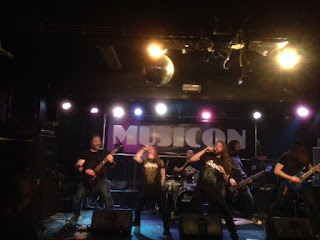 The Heritance closed the evening and although unknown to me, obviously a band with some experience below their belts. During the change over the small stage looked rather busy, but it turned out that one of the two vocalists would sing along on two songs only. Visually he was the mismatch anyway as he was blond, had no beard and seemed much younger than the rest of the band. When The Heritance started it turned out they played a Death/Thrash kind of metal, with the occasional break for twin guitars or good solo's. Their stage presence was good and their songs were as well. They even have a beer brewed by metalworld famous HappyFace beers: The Devil's Draught. This also turned out to be one of their best songs. As I am nearing a cold or fever, I was not bothered to get their merch package CD/Tee/Beer after the show, but rushed off fast. Next time I correct that I guess. Good closers of another fine evening of Dutch metal. Next evening of three Dutch metal bands Thursday in Paardcafe.
Posted by erikprogtricolor at 10:41