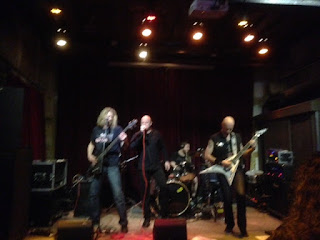 On a stormy Thursday Paard had it's first metal cafe of the year. While Hans & Mary plus Peter & Marga  went to Essen to see Fates Warning in great form, I could not travel this day and enjoyed yet another evening of Dutch Metal. Actually Warborn Waste from The Hague closed the evening, but I left early due to old age. The evening was opened by Razorblade Messiah from Rotterdam. I saw them last summer in Musicon and loved their heavy metal. Tonight was not going to be much different as  their mix of speed and battle metal came over very fine. Instrumentally this band is very strong and their Russian vocalist has an impressive range. Therefore we get this typical eighties screams, while he also can get low and aggressive without entering grunts. The songs are mainly uptempo where they sing about Chaos, Fire, Warriors and Metal. Their signature headbanger is called Metal Messiah which is a very nice way to strain your neckmuscles. This band is often in the area and I will go and see them again later this year. Very nice band playing good old heavy metal. 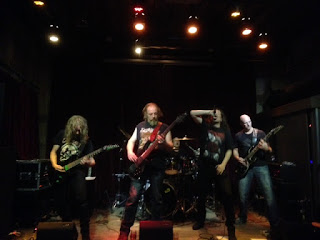 Next on are Callous Intent. Now I was planning to see them last October, but missed out on the day, so pleased to see them now. They moved to the next level in heaviness as they play thrash/death metal. Sounding very nice from the beginning, the highlight were the topics they sung about. If you followed the news in Holland and found any horror stories over the past years Callous Intent have a song about it. So after they described the shopping mall shooter we got in Bird of Prey even a song about the killer Oehoe terrorizing the city of Purmerend two years ago. All was presented full of energy and fast. When their own songs were finished, we got some covers still. I did not know Dismember's Casket Garden, but it came over very well. When we thought it was all over, it was not. As it is common behaviour nowadays to shout for Slayer at any live show, it is not always met with a Slayer cover. Well tonight we got a good version of South of Heaven as an extra. This made it two great bands on one evening and enough for me. 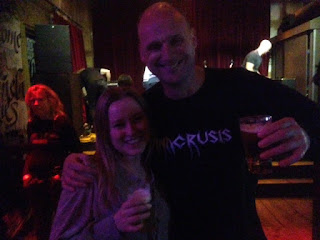 So I skipped the death metal from Warborn Waste, but as I saw them before and probably see them again soon not to worry. As this band is much younger than the previous two, they brought many young friends and fans. I was taken by surprise when Peter & Marga's youngest daughter Lea asked if I was Erik indeed. Nice to see the next generation stepping in, as again this evening would have deserved more attendants. Those surfing their TV channels and couches at home lost out again.
Posted by erikprogtricolor at 11:18