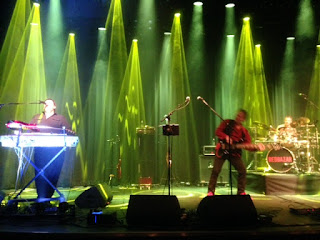 This year started for me on the live front with three evenings of only Dutch metal bands, but the coming week I go international and kicking off that week was an evening of very British Prog rock. To me Very British is a compliment as ever since I discovered this musical style my favorites have been British bands. Until today Brits are a class on their own, unless you are Australian Anubis who meets that class. Over the years I have seen live and bought on CD so many new British Prog bands, that stepping in for an evening of two unknown bands to me is hardly a risk. Now the announement on this event was not vey clear to me, so I was unsure if we would get one band playing songs of both, or if we would get two seperate bands. Turned out the latter, while I knew in advance that Peter Jones would be the core of both bands. Now Peter Jones is quite a remarkable character. First he is blind, so joing the ranks of Jeff Healey here. Tonight his instruments were keyboards and on a standard over that a horizontal guitar. Henriette and Harry told me that last time he also played several brass instruments on stage. Finally he is more than a bit of an average player as even Camel asked him to join them, so we can see him again in June. De Boerderij looked upon arrival empty and there were tables with chairs at the front and higher tables further back. In the end it stayed empty-ish, but not as desastrous as Ork two years ago when tables also made up for empty spaces. 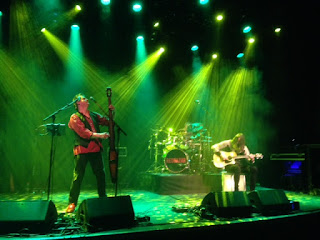 Red Bazar was the opning band. Now last year (or 2016) I tried to order their CD Tales from the Bookcase, but the postmen between Wales and Holland did not work. The seller very friendly returned my money and I promised to go and check them out and get the album if ever they would play Holland. So that was corrected and it did not take long to see this would be one of those bands  that impress you fast. Very british indeed the music holds all the parts good British prog needs for me. Long songs with story telling. A solid band with good musicians and at times heavy bits, mainly through great guitar solo's. And then there was Peter Jones. I read that people compared his voice with Peter Gabriel and yes that could be heard. Also traces from bands like Big Big Train, Cosmograf or Frost were around. To make the evening even more British the line This Green and Pleasant Land passed by. Now I  had to google it as too many progbands mentioned that line. Turns out it is from a William Blake poem, so got that sorted. The set of well over an hour focuseed on the last album, with also an older song in, when Red Bazar were still an instrumetal band. So when Peter Jones joined they got a voice in. At the same time an instrumental past shows that the band must be good enough to keep matters interesting during an instrumental set. Conclusion another great Prog band from the UK, which I shall return to often, when I look for quiet soundtracks during dark or sunny days. 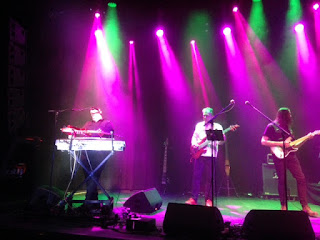 A break with no stage change and Tiger Moth Tales would be on. Well to my surprise not only Peter Jones returned, but the whole band was the same. OK the band put on different shirts, but   I recognized those faces. So hallo again to drummer Paul Comerie and on bass and guitar Mick and Andy Wilson (now that's a name you don't get often in British Prog). The question to me was if this would be very different musically. Well maybe not extremely different, I felt that TMT go a bit weirder on their sound at times, mixing in whatever they feel like. Luckily the high standards of performing remained and we got another impressive show. Another plus on British prog I did not mention yet, is that their inbetween song banter in general is filled with an undercooled dry sense of humor (unlike many continental bands I saw). Peter was not different and when he while buggering about during an opening gave us the tune of Blackadder, all was good. As I knew no songs in advance I can not name any highlights by songtitle really although something with a Tiger in the title was very good. The guitar over Peter's keys was used more this set and it turns out that he can shred away on this horizontal setup. So this turned out to be an evening of almost 2.5 hours top prog rock. Bands like these never reach large crowds I am afraid, but if you have the chance to see either don't miss out. You always wonder why all these thousands of people who go to some Genesis cover band do not support originals like this. How can anyone prefer Firth of Fifth again, but not as good as the original, over refreshing new bands playing own songs in a style pretty similar. I must be too simple to get that point.