In the Grip of Winter Fest - Baroeg Rotterdam 28 January 2018 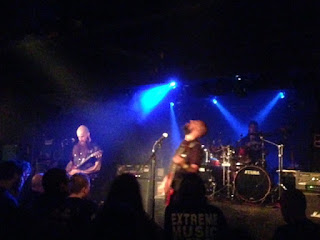 In the Grip of Winter is a new festival added to the Baroeg calendar. As any new metal festival deserves support this mainly Death Metal gathering was to be visited. Now I arrived late as I first was invited for a football  match a few km away from Baroeg. Dutch football and me basically stopped in 1992 when I left VVP 5, informed the KNVB of my unavailability for the national team and stopped goig to see Eredivisie matches. In those days playing in het Zuiderpark we used to go after our own match to FC Den Haag with a team of Martin Jol, Cor Lems, Karel Bouwens, Joop Lankhaar, or so to say an easy national champion nowadays. Football in Holland is in a freefall, but I enjoyed the afternoon. Even if we had the louder support, the better chances but lost 3-1. This meant I entered Baroeg after the first three bands had played already. Rene told me that Reptilian were very strong and Arian said Craven Idol to be a good band. 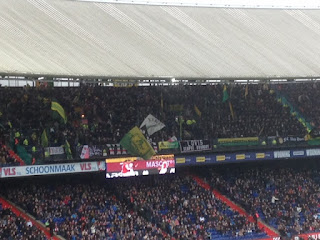 So I started with Execration from Norway. Their Death Metal was tight and grooving, but a bit too monotonous for me. We did not get sudden changes in pace or riffs. Next on were Brazilians and I have to support my semi countrymen. Luckily Rebealliun made it easy to support, as their set did have the variation needed to keep an intense Death Metal set interesting. Maybe the breaks inbetween songs could be shorter for devastating effects, but what a solid show they gave us. Now playing their last album, it is fast and brutal on CD as well. 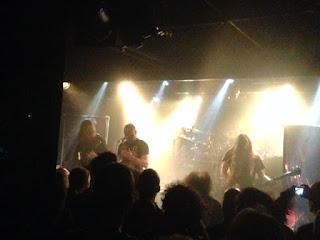 Pestilence were the main act and the ones who attracted most people. Now when Pestilence broke through in Holland I still was afraid of grunts, so they never were my band. As with age one becomes harder, I now could see they are Holland's pride on the technical death metal front. Maybe not as brutal as Rebealliun their playing brought the day to the next level really. This set was build around their first albums, with for me no nostalgic flavor therefore. To many others there was old glory and one succesfull show they presented us. As trains would not ride home and a swap to bus or metro halfway was needed I left when they were closing their set and pleased to see half this new festival. Let us see if this will be repeated next year.
Posted by erikprogtricolor at 10:27