As I already mentioned before, 2018 looks to become a good year for music based on January releases alone. About time I share some recommendations. 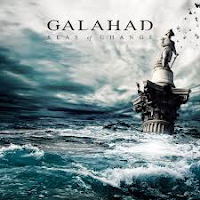 Galahad - Seas of Change
Galahad are one of my favorite progrock bands, although I only discovered them much later then the favorite ones that put me on track of this musical style (Marillion, Pendragon and Pallas). Galahad were never shy of mixing other styles and even electronical music in their prog, which to me always resulted in interesting albums. Last time I saw them live there was a big role for punky guitarist Roy Keyworth and bassist Neil Pepper. They have been replaced by old member Lee Abraham and Tim Ashton, but that does not seem to harm quality. With Seas of Change they released an epic of almost 43 minutes divided in 12 parts and describing the Brexit process. The result an epical album indeed with a Toastmaster and a Newsreader next to Flute, Clarinet and Sax to add some spice. When hearing the album first I was somewhat disappointed, but getting to know the songs after a while it turns out to be a grower. How I would love to see this album played in full. Stuart's vocals always sound somewhat thin, but fitting this very British progrock album all too well. Once again Galahad have proven to be unafraid to go sideways at times and these Seas of Change shall turn into a classic among their  discography for sure. 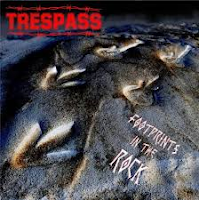 Trespass - Footprints in the Rock
Trespass are one of my favorite NWOBHM bands, although they never released an LP in the eighties. I knew them from the two songs I taped from Metal for Muthas and Bright Lights I had on a Stampij tape I believe (Stampij being the best radio show ever on Dutch national radio). Later on collections would appear with 16 songs on The Works and another 15 on The Works II. So why no LP? I guess labels were asleep, as Trespass were amongst the best with a very recognizable sound and One of These Days was a hit, that surprisingly never made them big. So next to their grungy album head in 1993, this actually is their first NWOBHM album on record. And the good news is, that while only Mark is original member the sound is still very similar to their songs of the eighties. Some songs sounded familiar as they played them in Musicon (Title track and Be Brave) and the overall sound is still very much melodic guitar intro and than rumbling on. Momentum has a clip on Youtube and pretty much represents the band. Good playing by Mark, Danny, Joe and Jason and yes I am allowed to call them by their first names, as they opened my HM B&B summer 2016 after all. In June they play the most sympathetic charity NWOBHM gig around at Mearfest and I am looking for logistics and a hotel already. 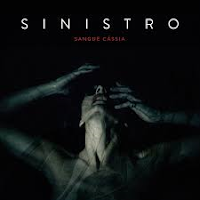 Sinsitro - Sangue Cássia
Ever since Portugal became more on our radar with Josie working there and future plans heading for Portuguese porco preto on the weekly menu, I also entered the local music scene. Turns out that Portugal has a lot to offer.mainly in the darker and heavier side of metal. After Moonspell Sinsitro might be the biggest metal exporter from the country with their Fado/Doom metal. The Fado comes from the voice of Patrícia Andrade, while the band is mainly slow and heavy. I became a fan with previous album Semente and went back in time to discover their hymn on Lisboa: Cidade. And now we have at the very begin of 2018 Sangue Cássia. Where Galahad were a fast grower, I must admit I still can not grasp this album fully. Maybe some headphones and reading along the lyrics might help.  With the lyrics being Portuguese (one of the languages multi-talented me masters) I do not feel that this adds to the experience as the music is all about the atmosphere. (Unlike Moonspell's 1755). Now I am still undecided about the album I hope to see Sinistro live again, as their show in Tivoli last year was very impressive. If so, than preferably together with Andrew who also loved their Semente album and mentioned me in his Ave Noctum review on this album. So returning the favors here. Maybe I can see them in their current and my future hometown Lisbon one day soon, sure that will be overwhelming. 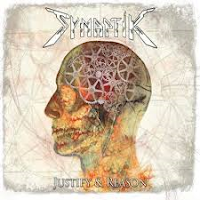 Synaptik - Justify & Reason
A good thing about the end of each year is that people and magazines publish their end of year favorite releases. Now one of the lists I always eagerly look out to is Andy Read's one on DPRP/Something for the Weekend. We have a rather large overlap in musical taste and there are just too many releases to catch everything good. So when he started listing his first 10 out 30 highlights my ears fell on Synaptik. What a shame I missed this band until now, as they play a style of music I totally love. Somewhere along Tech Metal or Progressive Thrash metal. It only took the opening song The Incredible Machine on Bandcamp (Look for Tribunal records as Synaptik has only the debut album) to make me surf to their homepage shop and order both the debut and this album. This is very powerfull music, with strong melodies, heavy melodic vocals without a grunt and lots of guitars. The album contains after the first five songs another five that appeared on the debut as well. It seems to me that although slightly different only, the quality of the first five songs is even better. This is good news, as they are improving therefore. Than again the last song is a recording of Your Cold Dead Trace with Alan Tecchio! on vocals. Fans of Techmetal around 1990 should hear this. Andy mentioned righteously Watchtower and Sanctuary as references, I would add Toxik and Hans should rush to bandcamp now.