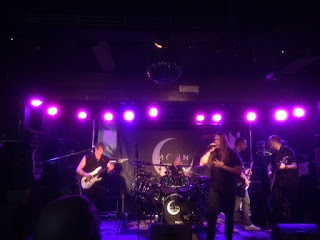 Friday 5 January already so high time for kicking of 2018 gig year. Musicon put on some dutch bands which seemed to vary in style. As I had not been to any show over Christmas- New Year this looked a good start of the year. First band on were Daisy-D from Woerden. Now if you thnk their bandname is somewhat odd on a metal bill, their music was even less pinpointable. Coming on stage and looking at them I expected some sort of Southern rock (helped by the 3 guitars, beards or cap) During the first song I thought we would get a show of dark wave/rock due to the low voice. Than we got to melodic rock and more poppunk like songs of bands that mix rock and accesible heavyness. When their lead guitarist sung music went more towards melodic hardrock and those were my favorites, Finally re-occuring technical issues with one guitar did not help a lot on the speed front. 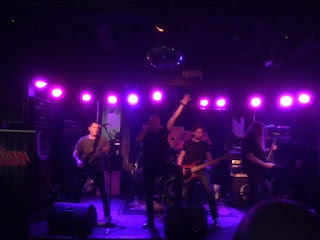 Second band were Vexation from Amsterdam. As they stated playing since 1758 they managed to stay under my radar for all these years. This is strange twofold, as first I do follow their style on stage 35 years by now and second I did like their music a lot. In fact they play NWOBHM. So we have two guitars, many uptempo work ,a solid base and decent vocals over that. Probably I did not go to enough old-school metal festivals in Holland to catch them earlier. Fact is that with this kind of faster headbanging metal you always have a winner on atmosphere. The band that got best reactions of the evening and one that made me wonder how many good Dutch bands are out their I've never heard of.

The evening was closed by Moonstruck bringing me back some 25 years in time. Their style of music reminded me strongly of Power-Progmetal as it was played in the early nineties. The late eighties brought us some US metal bands with progressive touches, with Heir Apparent and Lethal as two of my all time favorites. In Europe soon a wave followed with bands playing a style not dissimilar to them. Mainly German bands like Ivanhoe, Soul Cages or Richocher. Now Moonstruck reminded me very strong of latter bands. There is some Powermetal base, some Queensryche and instrumentally there is not much wrong either. If you than add the fact that they suddenly have one of Holland's best voices on stage we had a good band. Good songs, good performance and relaxed enough to convince on stage. My only advice to them would be writing two 3-4 minute all out headbangers to add variation in the setlist. I got ther EP Impact afterwards and shall keep an eye on shows of them in the area.

So for a first evening early in the year all was good again. Next week there is more in Musicon, when we go for heavier metal styles. I'll be back.
Posted by erikprogtricolor at 11:55