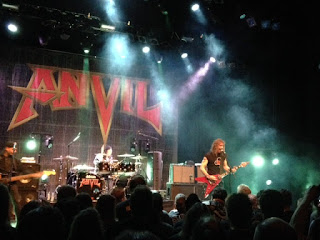 Anvil started their European tour in Leiden. The story of Anvil is known, as that is also the title of the best Music documentary ever made. In my office I made the DVD obligatory cultural education some seven years ago. Everyone loved the band after seeing the movie and those into metal should have a soft spot for Anvil. Now the film is already almost ten years old and Anvil did pass Holland several times since then. Knowing that the tour started with no less than four shows in Holland I thought Gebr. de Nobel were far too optimistic, putting Anvil in the big hall which can hold around 800. With an early start at 19:00 and the usual train problems I arrived when Rampart were closing their set announcing the last song in an accent stronger than Doro. The few people in made it look even worse than feared. After a short break GreyAttack started and I recognized the guys with sunglasses from a previous show on the same stage. Their mid-tempo rock was Ok, but the bar at the entrace with many friends turned to be more tempting. The evening was passing fast as we even seemed to gain on the time-schedule. So when we came close to nine I returned into the main hall. 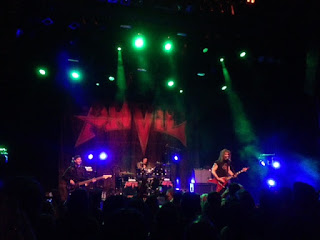 Wow, that was a nice surprise. The big hall filled completely. Well maybe not sold out, but even the two rings of balcony looked busy. so I was wrong and maybe the interview in the university magazine and showing the movie the previous evening gained some people. While saying that the majority was well beyond student age. Anyway it was Anvil time and Lips played March of the Crabs from within the audience to kick things off. A strong version of 666 followed and the atmosphere was set. Anvil know how to build a set so when they played an unknown new song from their last album  it was followed by another highlight Winged Assasins. Talking about highlights the I-did-something-wrong-grin of Lips when he pulled out his vibrator for the famous guitar solo remains funny. Mothra is also as a song one of their classics by the way. Like they should Anvil also remembered the recently passed away producer Chris Tsangaridis with Free as the Wind.When towards the end new song Eagle was played there even was a growing circle pit. Not sure if this was something new to some documentary fans, but it all was in friendly violent fun style. Metal on Metal announced the end of their set and yes, it is a classic singalong that everybody knows. An encore could have been Forged in Fire for me, but it wasn't. A succesfull evening came to an end, with a great show and for a change a much larger crowd than I expected and hoped for. Anvil also seemed pleased with the start of their tour. Now everybody shall say that, but if Anvil are one thing it must be genuine. Unfortunately I could not stay all that long in Leiden as today I had an 08:30 appointment at the dentist for some Pounding the Pavement in my mouth. This was too bad as I just saw some nice pictures passing by of friends with the band in the after show drinking party. Let's hope their tour stays such a success with Little Devil already being long sold out. 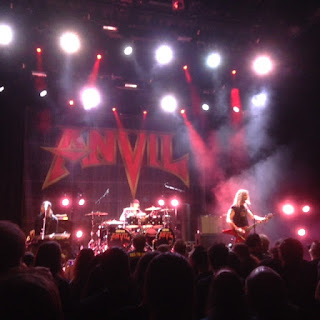