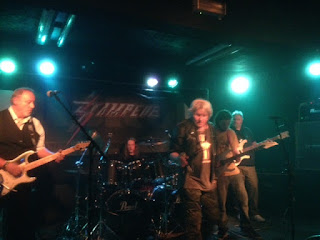 While trying to order my favorite CD's of 2017 seemed hard, putting up a list of favorite shows turned even more complicated. I had so many shows this year and do not recall any disappointing night. During the few festivals I attended maybe some of the bands were not my thing, but in general over one show a week was a party. So reducing to 17 only and taking out some fifty shows out was a crime. Looking back the year 2017 was for me mainly based around NWOBHM, Thrash and eighties metal. So we closing the shortlist I noticed that Progrock did not make it at all, even though I saw great shows by Dream the Electric Sleep, The Gift and Pendragon. Same goes for the heavier end with  great performances by Revocation, Fen, Fleshkiller or Sinistro. Also the fact that I had three bands staying over after their local gigs I did not let weigh in my favorites, while seeing the other side of touring and hearing the stories is always very nice. But cut the crap here is my list of shows that made the biggest impact on me in 2017.

17. Beyond Creation - DB's 2 July
The absolute masters of Technical Death Metal to me. While the year before we only got a short support slot their full show amazed all present. Mixing the very heavy with the melody and all so easy is beyond many things really.

16. Threshold - Bosuil 28 November
Back with a new album and an old vocalist they proved to be amongst the best progmetal bands as always. Great perfromance and as Hans told me in London Glynn was already more at ease. Good setlist as well.

15. UDO - Alcatraz Metal Fest 11 August
Last year I saw the full two hour show in Tilburg already. Now it was 90 minutes at the end of a festival day in a tent filled with 5000 wildly loving this fans. What a way to lose my voice over Balls to the Wall, Fast as a Shark, Princess of the Dawn.

14. Flotsam and Jetsam - Baroeg 2 April
In 2016 I missed their show in Musicon due to holidays. Now they returned to Baroeg and what a surprisingly great show this was. While they started their careers with classics the last self-titled album is also very good and live in perfect shape.

13. Tokyo Blade - Musicon 23 April
With the many NWOBHM shows in 2018 (Tytan, Warrior, Vardis, Night Demon, Tygers, Hell and Saxon) this is one that stood out. On a Sunday afternoon in far too empty Musicon Tokyo Blade brought us back to 1983 in style. They repeated the dose at Baroeg Open Air a few months later.

12. Manilla Road & Vortex - Gebr. de Nobel 4 May
This show was a complete surprise on high atmosphere all over, which already started at Vortex. Going back to the eighties once again was bringing out the best in many.

11. Mike Portnoy's Shattered Fortress - 013 6 July
Dream Thaken gave us the best Dream Theater show in years. Playing the AA suite in full the setlist was great and the performance by Haken  and Eric Gillette even better. A one off historical tour of progmetal.

10. Solitary - Musicon 10 June
Withe the many thrash metal shows in 2018 (Havok, Warbringer, Defazer, Overruled, Exodus, Testament, Overkill and Death Angel) this is one that stood out. Existing for 23 years, remaining fairly unknown abroad this was Solitary's first overseas tour. What a great band it was and even though they skipped Anthems of Regret that evening still made it one of the best thrash metal shows of the year.

9. Them - Little Devil 22 May
Them not only gave us a show of perfect heavy metal. They brought along three actors and the concept album was played to us. Amazing really that we could see this show in Little Devil. Such a great production alltogether this band deserves bigger stages (Considering boring Ayreon sold out 013 three times)

8. Insomnium - Biebob 13 January
My first show of the year and I thought noone would be able to top this. Winter's Gate in full was overwhelming really. In November I could see the best of part again, when they toured MTV. Yet their full concept album was special indeed.

7 Sacral Rage - Little Devil 14 May
Mario puts on many great shows in Little Devil and at the same time manages to introduce new favorites to me. This Greek band was unknow to me and gave us a perfect show of eighties US metal. Even got the LP of their debut and one band to follow closely. I love surprises like these.

6. Fates Warning - de Pul 28 January
Fates Warning going through their career since Ray Alder years and with a focus on Theories of Flight their brilliant last album. Well nothing could go wrong really and nothing did. Band in good form, Ray good by voice and a perfect setlist.

5. Michael Schenker Fest - de Boerderij 31 October
Michael Schenker was the guitar hero from my youth. So when he toured with his three original vocalists we would be in for a treat. First time I saw Graham Bonnet sing Desert Song live with this band. Surprisingly good show and Michael Schenker at his best.

4. Diamond Head - Baroeg 16 July
It was a long time since Parkpop 1983 that I saw Diamond Head play live. This band turned out to be so tight and solid, that Metallica's covering them was blown away by the originals. Warmed up by Martyr and Killer this was one party of Diamond Head Classics and their last album is just as fine.

3. Toxik - Lazarus 14 September
So I saw Toxik at Dynamo Metal Fest and Little Devil thinking I covered the festival and club gig and than this evening came. Lazarus being far too small stagewise and barwise for this great band and the atmosphere between band and audience became something different altogether. Josh even confrmed to me that this was one of their most remarkable shows ever and what a Circus it was.

2. Psychotic Waltz - Fluor 17 June
Psychotic Waltz were my favorites on stage in the nineties. In 2011 they gave a support slot return and now we had a full headliner set. They have so many classic songs and their playing was so amazing that we simply need the new album and many returns soonest. Still as good as in the past and a new song that sounded promising. Psychotic Waltz are back and how.

1. Stampede - The Exchange / Musicon  11 March / 8 December
Maybe the Compliance committeee would not allow me to put my own party at number one, but it started in Bristol really. Stormtrooper, Lautrec and Bristol Rovers brought Magchiel and I in perfect mood for Stampede live. During the aftershow talks I put the base for them making their debut in Holland on stage. Well for me this was the highlight of the year with all the stories around it both in Bristol and at home with them telling stories from the past. And yes the two shows nailed it as well.