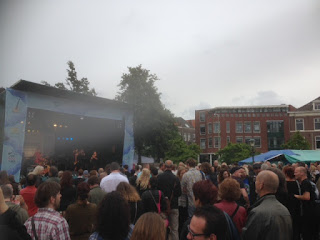 Amongst the free summer festivals in The Hague area the Zeeheldenfestival is certainly one of the more sympathetic ones. Held in the neighbourhood of the same name it is on a small square holding two stages, some foodstands and a bar. Enough to create  a good atmosphere and a busy Friday evening it turned out. In doubt between Musicon stoner night and this one I opted for the outdoors. The festival lasts five days, but on paper the Friday offered a nice mix of bands and so I met with Pieter for some live music in our old area as in the early nineties he lived on the square and I did around the corner. 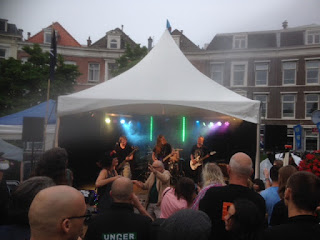 Having dinner at home meant I skipped the rockabily covers from Ignition Rockabily and Forever Saturday was on the small stage. This young band plays poppunk rock and roll songs. They can play and brought all with some enthusiasm. Straight forward and simple their music might be, but it went down well at a festival like this. The main stage gave us hereafter some Ska/reggea/salsa music which was not my thing. Towards the end I was at the small stage waiting for Faith Ablaze to start. They were anounced as Thrash metal/Metalcore so more meeting my taste. Although being a local band I never saw them before and it turned out they were a rather good band. Unfortunately the sound was pretty bad as in the opening I only heard drums and vocals. During the set it improved a bit, but guitars were clearest during intros and as soon as the whole band played they were too soft in the mix. Asking for a moshpit was not met with any reaction. This also as the "pit"was taken by some children well under 10 years old and a man well over 70. During a general music festival grunts are always met with frowns and they might have been a tat too heavy for many. I thought about the funny Metalfan review of Graspop mentioning the poppy Rammstein fans having to go through an Emperor set before they could see their band from near the stage. For me a band to keep an eye on and maybe see one day at Musicon or HPC with a better sound. Closer of the evening were Liptease. Three female vocalists in sailor outfits and later 50's bikini's basically ruined what was a rather good Rock and roll band. Playing all kinds of covers a band that went down well and made me and many stay even when the rain started. A nice evening kicking of a weekend that shall have some Black metal tonight and ending with Tech Death masters Beyond Creation tomorrow.
Posted by erikprogtricolor at 12:24