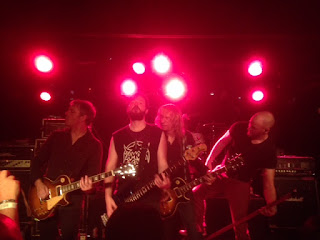 Diamond Head in Baroeg the day after Dynamo meant I took it easy at Dynamo and left early to be OK the next day. While having missed them on stage for 34 years I am part of Diamond Head history. July 1983 and Parkpop still put on bands I loved. Openers that day were Marillion on their first Script tour of Europe, followed by Diamond Head touring Borrowed Time and for the first time ever playing outside the UK. That day I bought the fan package and big part of the eighties I walked around in my jeans jacket with only the blue Borrowed Time patch on the back. Then it became a known story: never breaking big as they should, Metallica covering 4 songs, still releasing good albums. This resulted in last year a very strong selftitled album, which I described as the comeback album of 2016. The new vocalist Rasmus  comes awfully close to old Sean Harris, so my expectations for today were way up there. 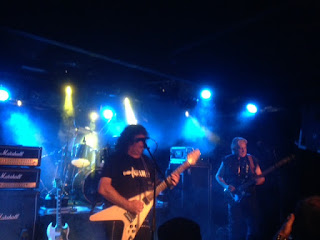 When entering Baroeg Burning was already on stage. This band runs the risk of being "that band from Hugo Very 'Eavy", but they played good old fashioned hard rock. Nothing modern about their sound, but played well and some good songs I heard. A first warm-up for things to come. With Killer following them I got the first surprise of the day. Chezy asked me if I knew them on forehand and I only know I had no LP's from them at the time. I did remember references as Belgium Motorhead and Shorty on guitars and vocals. This was still true, but the main man on stage was the extremely enthusiastic bassist/vocalist Spooky. What a show this trio gave us and what great bang along songs. Highlight to me was Kleptomania, but this was 45 minutes well banged alltogether. For warming us up even more Martyr came on next. Anyone with a mild interest in metal in Holland should have seen them play several times over the past years as they do play a lot. The good thing is that they guarantee a party as their presentation and songs go down so well (with a Martyr beer I finally found out after Rick's hint). They are the best metal band for a party in Holland and I don't think you can get tired of seeing them over and over. The small girl opening came along again and how nice and arrogant she looks through blackened eyes. So the party was over, now let the party begin. 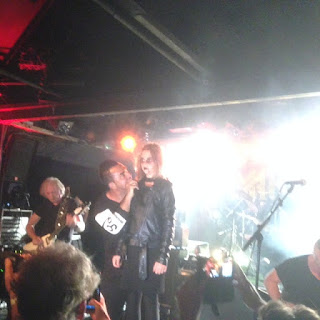 Diamond Head made me decide to move to the front rows. I needed to get this blown over me at full force. Surprisingly they opened with Wild on the Streets from their only album I do not have Death & Progress. Hereafter Borrowed Time in a shorter faster version, brought me back to my teens and the set was about old and new from there on. The last album was represented by Bones, Diamonds and Shout at the Devil, proving this one is also live as strong as their old work. Of course the four Metallica covered songs were included and the set closed with their all time classic Am I Evil? I was proudly wearing my tee with the opening line of that one, realizing it is probably not official merch. As there was no curfew with the early start today we got an encore dedicated to all the ladies in the audience Sucking My Love. A great end to an even better set. Only complaint I might have had was their new shirts did not look that great to me (still hoping for some Rodney Matthews cover shirts). Liking to buy a souvenir as support I passed this time. Backwarding fast into 1983 I do remember that they had the nerve to not play Am I Evil? that day. Also were they warming us up for soon to be released Canterbury an album skipped this evening. Personally I also loved the Canterbury album and would have liked to see Night of the Swords  or To the Devil is Due coming by. Well with too many songs to choose from one can't have it all. Still with songs like Lightning to the Nations and In the Heat of the Night not much can go wrong. Not commenting on the band so far I can say this is a very tight unit who decided luckily on a fast set for us. Rasmus has a great voice live, the second guitar (not in 1983) helps the sound during the many solo's Brian Tatler gave us and without any attitude issues this was one fine show of top class NWOBHM. Turns out I managed to traditionally loose my voice when shouting to Tiago (not the Devil) this morning. Still wondering why it took me 34 years to see Diamond Head again I know I will be there when they return to Holland. Unfortunately Blast From The Past in Belgium in December won't work for me. What a great Sunday show in Baroeg it was and even Mollema got motivated giving Holland it's first stage win in the Tour de France. 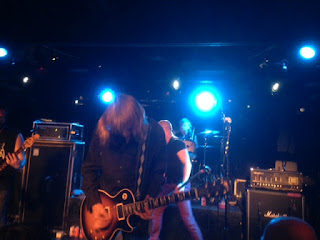