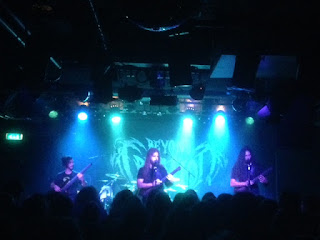 Beyond Creation showed last year that they are the new benchmark in Technical Death Metal on stage. That was only a half hour slot, so when they announced to be back in Holland headlining this time, I knew I would be there. Good to see that I was not the only one recognizing their power as DB's posted sold out during the evening. I did leave home alone, but was pleased to see several dutch-progpower- I am not afraid of grunts- nor am I in Barcelona this weekend -regulars already having their first beers on the terrace. This meant that inbetween bands we could enjoy a beer in the sun until staff warned us the next band was on stage. DB's hall is a black box within a larger box. This means it can get warm and it is a dark walk inside, hoping you do not hit any beers or people until your eyes get used to the dark. First band was from nearby Amersfoort. Their death grunt was supported by rather epic metal. What I remember are the half painted faces and the hoodies for members with short hair. Musically rather good, so let's see if they shall tour Holland and play in the area one day. 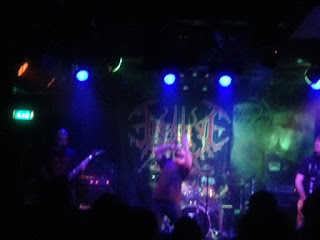 The second band was already one that got my interest in advance. The band is Creative Waste and my interest came from the fact that they are from Saudi Arabia. Now I visited the Kingdom several times for work and never came close to imagining that such a different country could give the world such a brutal band. They were announced as grind/crust, but I heard more death metal packed in short songs. Turned out they were a good band and their vocalist was one energetic little man. On one side he reminded of the stage runner from Persefone, while he mixed some dramatic moves and jumps ala Devon Graves in his presentation. I also was reminded of a certain iron ore purchaser in the region, but can't go into detail there. Most of us thought the show very entertaining and the band surprisingly good. during a break I wanted to talk to them and ask about metal live in Saudi, but did not see them around any longer. So now I can only imagine live shows of this kind should be rather impossible to them and they were showing their happines to be on stage. Wish them well on tour and who knows one day in nearby Dubai I can see them again. 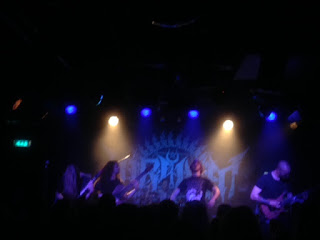 Virvum from Switzerland were next on and this time brought a bassist. I did see them earlier this year at Complexity, but I did not really see them there. Suffering a festival syndrome I went for a bite after seeing bits from the stairs in small Patronaat. The difference therefore was huge as tonight they came over so much better to me. With all technical bands you don't need to worry about their level of playing. Here also the guitar and now present bass were brilliant at times. With fast drums settting the pace we got 50 minutes of top class death metal. Only point for improvement to me would be the vocals showing more variation. Far from being a swaffelgrunt I did not hear the deep gut or brutalness that at times would fit the music nicely.  While saying that they made such an impression this time, that I probably shall be back when they are playing Holland. 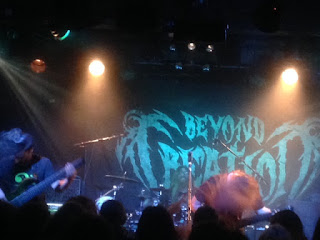 And then it was time to get blown away again. I did read my review of last year just now and benchmark, setting the standard, followers as leaders like Cynic and Atheist for me, Awesomeness and totally unbelievable instrumental mastering it was all still there. As these shows can be very intense it was also great to see that now playing over an hour my attention did not float away one second. Giving us an overview of their two albums The Aura and Earthborn Evolution time flew by. This is not a band to describe and not even one to hear on CD only. Beyond Creation should be seen and felt live. What we got resulted in many banging necks plus smiling faces around me and more upfront some pits as well. My only attempt to describe what we saw is going through the song Coexistence. Kicking of brutally the band asks for and gets a pit. Vocals go from brutal to harsh and the song develops into extreme glory when suddenly the fingerpicking starts. That is two guitars and one bass with lots of strings in total giving us a mellow break and the band smiles friendly at us. All this to suddenly burst out again and solo's and riffing bring us back in Tech Death heaven. It is good that I gave up on playing guitar almost 30 years ago already, since for aspiring musicians watching this can only be frustrating. Last time I saw them I mentioned on the Progpower forum that this band would be the one if they want to bring a technical death metal band to Baarlo. Now I am divided on that. While all PPE goers highly appreciated them yesterday, I think the problem shall be in following them up. The grunts shall never make them headliner, but a much lighter band shall face the impossibility to follow this up. For me they are the benchmark in their genre and I guess I might have to see them again on the "wrong tour to F&ck with" later this year, even if only for half an hour again.  When blown away this much I tend to get some merch. Having the hoodie already I went in the blind into two side projects from band members. Holding the Canadian stamp of quality guarantee both Death metalling Unhuman and Black metalling Incandescence mix the technality to very interesting albums that need another ten sessions before getting an idea what is all going on. I do not know where Beyond Creation shall end up, but for me they set the standard in extreme metal. Looking around me yesterday I think that was an Omnipresent Perception. 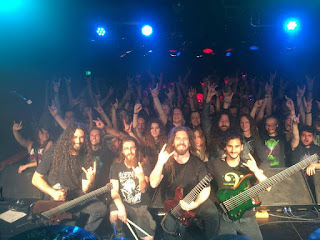