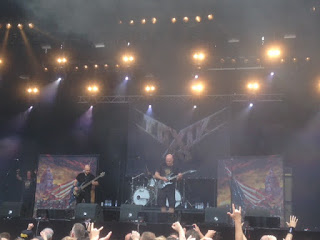 Dynamo Metal Fest is back at the Skating Rink in Eindhoven. Well they have been back for three years now, but as they plan in the middle of school holidays I was abroad the last two years. Last time I was at the Skating Rink in Eindhoven was at Dynamo 1991 when Psychotic Waltz, Armored Saint and Metal Church ruled the day for me. This year the line-up was impressive and with tickets at only 20 Euros no wonder it sold out. I had some limitations as I need to be fit today, for some of the heroes from my youth. This meant I thought it smart to say no when Ron and Astrid offered a ride, as I was intending to leave early. Slow learner I am I counted on NS to train me to Eindhoven, which meant a detour and smaller thus overfull trains. Pleased to see Arian and Eddie at the station in Eindhoven as the waiting started first 25 minutes for the bus then 30 minutes to get in. Thanks for the beers, which made the waiting easy. This resulted in Vuur already starting when we were still in a long queue and an echo came out of the rink. Now I was not so much bothered as I did not come to see Vuur. What I heard when inside was Ok, but sound and distance blew a fair impression away really. 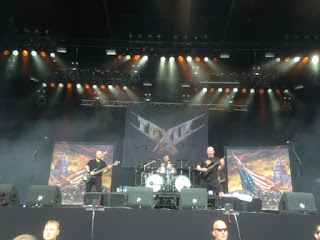 Next one where the band that made me go most to Eindhoven: Toxik!! World Circus and Think This are two albums anyone into technical thrash metal should own. They have been returning over the past years and shall release new music next month. Before they started I decided I needed to be closer to the stage and Peter agreed. With Charles Sabin on vocals (from the Think This album) they opened with Spontaneous. What a killer song that is and even the poor sound at the beginning did not spoil my trip to headbangers heaven. What followed were Heart Attack and Social Overload and a trip through both albums spiced up with some new songs (of which Breaking Glass stood out positively). When they arrived at their uberhit World Circus I did something I do not do that often anymore the past decades. Gave my beer to Peter and jumped into the pit. As this was an all age affair I was pleased to see I still have it in me. For three minutes that is and than dying of exhaustion moving forward to the stage.  After two more songs it was over and I knew I saw the highlight of the day. While sound was not impressive I wondered how great it would be to see them in a smaller venue. Well on the train home my thoughts were met with an announcement from Mario in two months already. I shall be there if surviving Baroeg Open Air the day before. Now Metalfan mentioned there would be signing session of some bands. Normally I can't be arsed about that, but I now had my Tour de France mountain stage cap with me (bold man sunny festival tip) and this would be nice to have signed. Well it turned out the Metalfan stand was hard to find. When I gave up searching and asked the official merch stand the stunning reply was: Everyone asks us that, but we have no clue. Only later on I realized I should have asked Jeffrey their main live reviewer, who I met up with along many PPE regulars. Well Little Devil is a venue where all are accesible, so I shall thank them for this show in September. 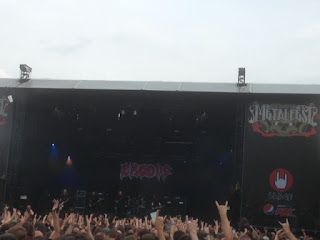 Following this at a festival is always hard. I needed a break for food and more drinks. At the same time Prong were on and they are the last band from this day I do not have any music on CD. They actually sounded rather good, but did not get my attention. During following Entombed A.D. I was still at the back at the food and beverage part of the rink. Returning at our spot near the soundman for their final songs, they were good again. Closing with Left Hand Path got a rather loud response overall and they were a good representative for Death Metal this day. The day itself was build around thrash metal and next one were my second favorite of the day Exodus. This time I kept my distance from the stage as with Exodus their is murder in the front row and blood upon the stage. Well even from a distance this was one overwhelming agressive attack to the neck and the ears. What a show and they truly seemed to love being back at Dynamo. Their Tees were nice as well with the logo in Dutch colours and the text Make Dynamo Great Again on the back (but I got the Toxik one). With Steve "Zetro" Souza on vocals they presented an overview from Bonded by Blood to Blood In, Blood Out. Well anyone who can end their set with killers like Toxic Waltz and Strike of the Beast, shall blow away the audience. Another highlight that showed to me that both bands and many older fans love it that Dynamo is back as a festival. 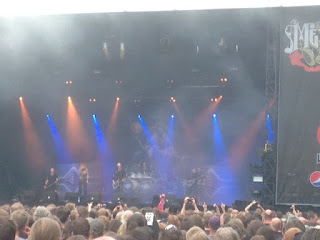 I was very curious what Devin Townsend would bring today. I have many albums of him in several editions of his solo band, or with Strapping Young Lad. While he can go all over the range ambient to full out metal some returning items are his over the top epic presentations and more than full sound. On the other hand he can talk a bit too much inbetween songs with his nerd-pride-self depicting dry sense of humor. Further we knew Anneke was around as she played with her new band Vuur before. Well the outcome was well above my expectations. This panned out in one bombastic fest and Anneke returned a few times to up the atmosphere. While I think I recognized some parts I donot know any of his songs played by title, which doesn't matter really. Fact was that he played tight, spoke short and impressed. With the risk of being lightweight on today's line-up I noticed none of that with the rather heavy set. I was not the only one as reactions over the field were loud and clear, another winner. And then I became smart and left. Yes Ron I created a backbone since my Oldtimer days and actually left as planned. I knew that if staying another three hours, times x beers I would suffer today. I also agreed with Tiago to meet at home before twelve, in order to find out he slept elsewhere. This meant I skipped Testament, whom I shall see maybe at Alcatrazz and surely in Patronaat later this year. I further do like Gojira, but not as much as my three highlights of the day. With their star rising and rising I am sure they will be back for more. 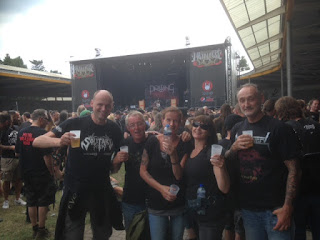 Well Dynamo Metal Fest is back and if not on holidays next year so shall I be again. Last year I read complaints on toilet capacity, this year that was not the issue. There were capacity problems at the entrance plus food and drinks, but  I do not know if that can be expanded. The mood all over the day was great and it is clear that many people my age love to see bands from our younger days on stage with likeminded souls. Being sold out now, I hope they keep this format of one day old school. First band for next year was announced during the day being Annihilator.