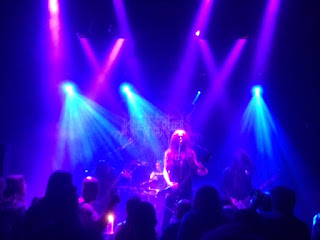 Doomsday Celebration presenting an evening of Black Metal from Chili/Sweden, Holland and Belgium. Reasons enough to let Zeeheldenfestival for what it is and go to Leiden. As I am no Black Metal specialist whatsoever, I go in white and see what the bands bring. Well that was different today. Openers Kosmokrator are Belgum and made their Dutch live debut. A moody opening sound and on stage came five man hooded and a black veil in front of their face. The opening songs were shortish, but what I liked most was their epic closing song, which even included a horn for darkening atmospheres (although not as huge as the ones Dordeduh blew earlier this year). 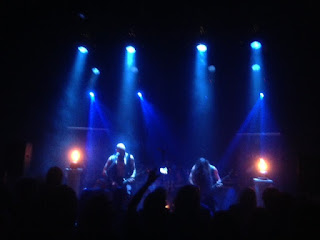 Next on stage were Infinity promoting their new album Hybris. This band is live a trio consisting of two guitars and drums. The drummer also sings, which might have resulted in an empty stage, but some burning flames filled the gap. As soon as they started playing this band got me by the throat and kept me hanging until they finished an hour later. I do not know why exactly, but from the three bands they made by far the biggest impact on me. The double guitar work with many solo's made me forget about a lack of bass altogether. Apart from a few silences inbetween songs this was one fest of harsh sounds packed in great melodies. Good live band and listening to Hybris now also not bad on CD. Headliners were Hetroertzen a band formed in Chili moved to Sweden. As in Black Metal their is no space for small talk or introductions inbetween songs I do not know whom were which nationality. By the looks of it the tall vocalist guitarist might have been swedish and the smaller sidekicks on bass and guitar to be Chilean. At the same time the bassist looked like a member of Tribulation. Anyway as it is about the music, what I liked most about them, was the presentation. They brought their songs with conviction and moved around the stage. The songs themselves did not make the impact Infinity just did on me, but their show was good to watch. A nice evening in de Nobel again, which I cut short as an early rise was waiting, bringing tents to the camping Tiago is invading today.