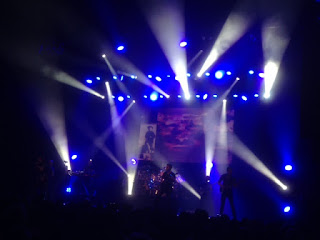 Mike Portnoy gathering Haken and Eric Gilette (Neal Morse) to play his Dream Theater AA Suite fully. Well that sounded to more than an obligatory attendence for any progmetal lover. So I went and saw one evening of amazing music. Before I get glorious, let me set the ballpark and share some complaints. I am a Dream Theater fan, but tend to go against the stream of some bigger fans. I love their first three albums When day... I still bought on LP, Images and Words is a Classic Must Own in Progmetal and Awake is their best album period. So when Mike asked who was there in Utrecht in 93 surprisingly few arms went up. Well let me tell you younger fans and later inflows. The Images and Words Tour beats anything Dream Theater did thereafter on stage. It was the first time that we saw such a band and they only had good songs. I think they played Bospop when Seasons was released and than I went off to Brazil. Guess what: they decided to warm up for Falling Into Infinity in Brazil, So I saw them together with Josie in not the best area of Rio playing Under Peruvian Skies (about nearby Peru as they called it being over 4000 km away). I am drifting off, but my point is that for me Scenes From a Memory is not a favorite DT album at all. Actually it won't make my top ten of DT albums and here comes 013 in the picture. When looking for times of show turned out they put the setlist on the page, so gone were the surprises and to my dismay Mike Portnoy loves Scenes as it was almost all about that album. This can be overcome, but why the hell did 013 decide to limit the hall and call it sold out? I knew people who wanted to join and could not. Further it was too busy in the crowd, meaning you could not walk freely around.  I know that the AA suite is about Mike quitting demon alcohol. This however should not mean that ordering a drink becomes a pain to get back to where you were. I moved to large beers to avoid the hassle. Being busy meant I did not run into the people I knew would be there. Well I saw Alex, but he was on stage holding a camera. So it seems there will be another Mike Portnoy DVD filmed in 013. Before moving the mood and go to the music one final complaint. The T-shirt was just horrendous. A picture montage of a man does not work for me. The back was good with the logos on bands he recorded or played with. But where was Fates Warning? I saw him drumming with them at Headway and opening for Queensryche, so he left the best band out for reasons unknown (rights maybe?). 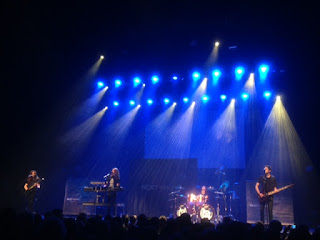 After the dutch complaining it might look that I did not enjoy myself, well how wrong can one be. I already looked very much forward to Next to None after Andrew sent me his rave review on their new album (see Ave Noctum). Well I can be short, what a surprise they were. I was expecting a young band djenty and hyper, on came four very good musicians showing us the future of Progmetal. After the second song I knew I was going to get their album at the break until they told us it was sold out. we got some 5/6 songs with a huge epic to close. The turning keys for the vocalist were interesting and even more interesting was hearing that the guitarist has a voice as good, if not better. The main voice at times sounded not far from a certain mr LaBrie and also the band Three came to mind. When he got louder and gruntier he was less impressive (Swaffelgrunt anyone?) but the variation of same worked fine. I am definitely going to check out their new album and follow them closely. One final tip for the drummer whose name I won't mention. Playing like animal was impressive, but leaving the stage all the time? I never before saw a drummer leaving the stage three times in a 45 minute set. Coming back laying on the stage seemed a bit over the top, so I hope there are no ego issues developing here. Definitely a great band who deserved to be here on their own merits. 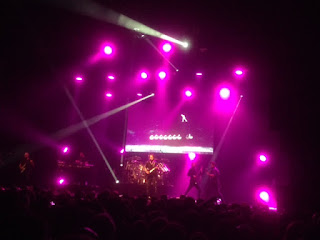 And then we wait for things to come. For  those not knowing Haken, they were introduced as the best band in prog at the moment and Mike might be right there. I prefer their first two albums, but as a band they play wonderful. Biggest surprise of the evening was Eric Gilette. He played the majority of the solos and also had a great voice being allowed to lead at times. I stopped following Neal Morse due to releasing similar albums all the time and the praying factor. Turned out I might have to check out recent work with such guitars on it. The opening songs were by title very well choosen. Strange Deja-Vu it was indeed in this setting. The Mirror is one of my favorites on their best album and linked here nicely as hello mirror returns several times in the suite. This was also the chance for Diego to show his keytar skills. And then the moment came I was really waiting for hearing the suite in full. In five songs Mike described the twelve steps of his AA healing process and all clocking around ten minutes or a bit more this was one of the best progmetal hours I saw in a long time. The songs themselves are all winners and hearing the full story for the first time in one go, was beyond amazing. What a band, what a performance and what good fun. The Glass Prison, This Dying Soul, The Root of All Evil, Repentance and The Shattered Fortress all guided by interesting images on a big screen and again what a band. Anyone still having the chance to see this don't miss out. And if you did miss them, there still is a DVD coming. Mike Portnoy was always the creativity behind DT and thank him for bringing this show. I believe everyone was staring in awe to the stage when it was over and it took some time before chants for more came. Now I knew two things. He would only revisit Scenes and the trains were again a problem tonight. So I did see Home (which is great) but left during the Dance of Eternity (boring) in order to find that only trains to The Hague were still on time. So I got lucky if you don't count the hail, rain and storm on the bicylce. I wonder how many people are today making a playlist with the full suite on their computers, Ipods or whatever. One historic night it was.
Posted by erikprogtricolor at 12:02