Twisted Illusion - Insight to the Mind of a Million Faces 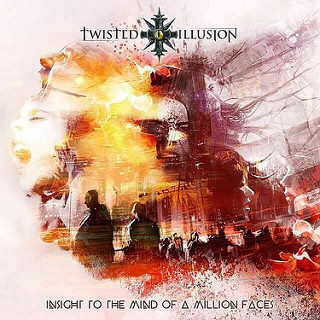 Twisted Illusion was unknown to me until Brian Mear announced them to play at December's Mearfest in Hastings. Now he usually digs deep into the NWOBHM past, but called Twisted Illusion a Progmetal band. Reasons enough to go to the internet and find last year's debut album Temple of Artifice on Bandcamp. Blown away would be an understatement after first spin. This band blends lots of styles I love and I guess progmetal it can be called for that. My first and easy description of their debut would be imagine Motley Crue playing progmetal. So as they were pledging their new album I went for the CD bundle debut album/new album and an acoustic bones. It's almost three weeks now and all three albums have been played omnimous times in an attempt to grasp what is going on.

Insight the Mind of a Million Faces is a double album totalling a few seconds less than 100 minutes. CD one holds the shorter songs and  goes all back and fourth blending the unmixable. Why I like this album so much is that there is a large dosis of accessible melodic hardrock (may I call it hair metal?) in the mix as well. I mean Same old story, same old story in opening song Reflections made me think more than a bit of Kix. But this is definitely not a smooth, slick hair metal album. There is also some sleazy rock side to it, which puts us also back to the eighties. Then there is a Neoprog side and defintely some Classic british hard rock as well. When I kept on trying to box them and thought of The Black Symphony as reference I finally got the point. This band should not be compared and squared into similar styles or bands. They have a very own sound and make just Twisted Illusion music. Some general references might be their massive choruses at times, their instrumental domination, or their urging rhythms. They are not extreme(ly) metal and just play heavy rock music with an attitude.  Arriving at CD two matters go more progmetal by time alone. Holding 42 minutes and two songs makes any progfan hopeful. The title track lasts over 28 minues and is the highlight of the album. Holding 8 parts all their best characteristics come back. A special mention for the crazy guitar solo's in Empathy, Content and Save Me. Now there is another plus on this album in the lyrics. Looking at the title one might fear pretentious dictionary lines that make any non-native English reader like me lost in the plot. Well no such nonsense here, actually the lyrics facilitate the shouting along (Life's Big Questions Aren't For You to Answer). After the rollercoaster title track the album closes with 14 minute Bluesy Progmetal ballad Discovery, which holds another catchy chorus for the masses. The bonus EP Acoustic Prog Bollocks is another gem. Interesting to see how Hatred is a Virtue a heavy rocker from their debut stands proud stripped acoustically and Tribute is a funny cover song.

So I am impressed indeed and wonder what this band sounds like on stage. As I am not sure if the weekend of Mearfest shall be feasible for me, I will start working on getting them to Holland. Such a great album deserves a great cover and that is also above average, with the hand of Molly showing the band being good people as well. Did I mention it is worth checking this out if you like some accesible progmetal with an own sound? Official release date 22 September, or pick up a copy at a show of them.