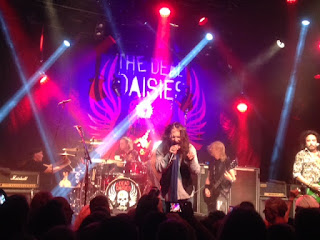 The Dead Daisies coming to a town nearby is a good reason for a night out. They play Classic hard rock and members been all over the place with great names like Whitesnake, Lizzy, Dio, Crue, Ozzy to name just not the least few. On their way to Graspop in Belgium they stopped at de boerderij. As 12 friends of mine are going to Graspop this long weekend, I ended up going alone to Zoetermeer. Openers were Order of the Emperor. This band plays in the same style and knows how to play. When comparing with the headliner it was clear where the difference was, a certain mr Doug Aldrich. OotE also have solo's in their songs, but never as loud, fast and spicy as The Dead Daisies. The band won some competitions, so let us see where they end up. 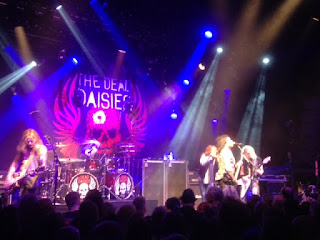 The Dead Daisies on stage is a colorful experience, the shirts, hair, guitars and lightshow make this a stage to watch. Bassist Marco Mendoza played the home gig as he has been here many times before and spoke the basic dutch words as a result. I have only their Revolucion album and Mexico came by early in the set. The opening actually was very strong. The experience of the band was clear to see and while some of them might be rockstars the presentation was extremely sympathetic.  Actually they mentioned this as well, we're not stars but just like you fans of this Classic Rock. That was also the reason I had some doubts further on in the set. The number of covers of Classic Rock songs was that big at the end, that it looked like a cover band on stage at times. OK obviously they play above average but for me Rockin' In The Free World, Helter Skelter, We're an American Band could have been switched for own songs. One cover that was a blast was Midnight Moses. It also is on their Revolucion album and I did not even know it was a cover (Alex Harvey). This evening for me was also the first night I saw John Corabi sing live. What a stage animal and while very American in the talks also great in getting the mood going. Highlight was his continuous mistake of thinking he was in Rotterdam. When they first stated spending a few days in the city and loving it eyebrows raised. Zoetermeer is for living or working, but definitely not for tourists. Later he asked if he could tell his friends in the USA that Rotterdam were his frends. This until someone took a box and wrote in big letters This is not Rotterdam!. The box ended on stage and John was happy he was at least right being in Holland. Another humoreus intermezzo for beer drinkers was with Doug. Asked what he liked in Holland it was the beer. So he got from the crew a sponsor beer Bavaria. I saw the WTF look in his eyes when he took a sip. Explaining to foreigneres here. If in Holland you want cheap beer with a hangover guerantee you take supermarket brand beer. If you want a tiny bit better you take Bavaria. Then there is a huge gap to the normal beers. Putting it differently: If a friend asks you over for a beer and he offers you a Bavaria at home he stops being your friend there and then. At least Solitary are enjoying their Hertog Jan now at the Mill. But returning to the show, we got almost two hours of high class Classic Hard Rock with some brilliant performances. Anyone going home without a plectrum (me) was a minority and the first 100 visitors were invited for a meet and greet. Majority of shows I attend don't make 100 people and the band walks around freely, so nothing special there. With Aerosmith, Purple and the likes saying goodbye there might be a gap to fill for The Dead Daisies. Tonight already resulted in a fulll Boerderij, so maybe next time a larger venue is needed. Many covers it might have been, but Highway Star kicked ass in the encore. 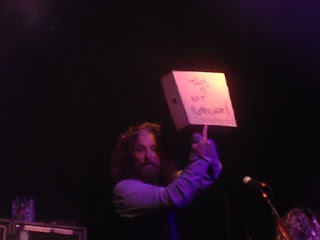