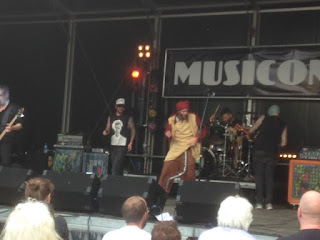 Waking up on Saturday it was pissing down and I thought my Kaderock would be reduced to a visit to Musicon in the evening for Neoceasar and The Howl Ensemble. But it turned out that the weather gods like Kaderock as well and the sun broke through in the afternoon for a beautiful day. So I arrived  at the festival when Gerorge Baker hit the stage. I do no recall ever seeing so many people on the square and streets during Kaderock. So in spite of doubts in advance this was a success. Next band on the main stage outside would be Fleddy Melculy. This Belgium band plays hardcore/metal and links dutch lyrics with some heavy short songs. I knew them only from YouTube, but could easily sing along with their songs like Brood, Geen vlees wel vis or their closing hit T-shirt van Metallica. This last one is recommended to search for by those who read dutch. Let's face it we all raise our eyebrows when hollywood stars or people who shop at H&M or Primark suddenly wear T-shirts of bands they do not know. This band was the perfect band for creating an atmosphere and play a general rock festival. Not that I need to get their album for playing at home, but a great live band. 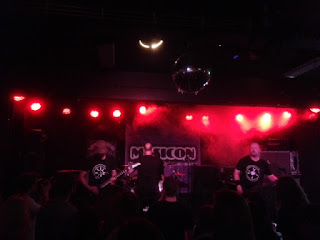 What followed was beers in the sun, some decent Irish music from a Dutch band and at 20:00 hours Neoceasar to metal up the festival. This band of former Sinister members gave us a good banging up wth their Death Metal.  Last year I saw them in Baroeg and again they were tight, fast and heavy. Good band. The Howl Ensemble followed them up, but I thought their instrumental music a bit slow after the Neoceasar blast. Even a brass section joined them at some songs, but I was through. Helped by the weather this was again one great edition of Kaderock, probably the best summer festival in The Hague area (if Schollenpop does not put up a metal stage that is).
Posted by erikprogtricolor at 11:03