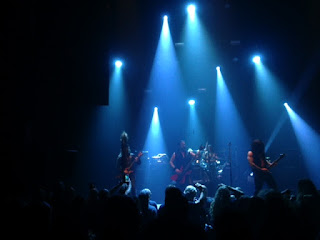 I Am Morbid plays music from Morbid Angel having two ex members of that band. They are completed by two guitarists with a background in Heavy Metal bands like Metal Church, Lizzy Borden, Circle II Circle. Adding that this was one of the few metal evenings in het Paard and no excuse to stay home really. The line-up was filled with no less than four supports so of for an early start. For that I missed most of openers The Heretic Order and saw one song only. Horror metal it seemed and what struck was the drummer in a bloody apron. Next band was Helsott from Southern California as they kept reminding us.  Their music had lots of folk in it and reminded me of Finntrol. Somewhat disturbing many instruments came from tape and sounded louder than the guitars. For me this took the interest away really and the bar was tempting. 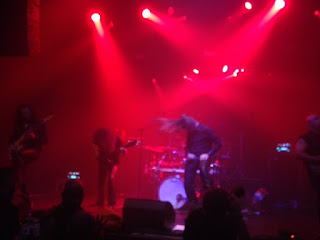 The third band was possibly the best of the evening to me. De Profundis played a more technical version of Death Metal and did so very well. A bassist coming on stage with 6 strings already made me hope for some string wizzardness and there was plenty of that. Also the songs were strong and when they ended  with two from their last album Kingdom of the Blind they managed to convince me to get that album. Funniest comment of the evening came when the vocalist called Paard the best venue in Europe and us a great audience. This at a time when a rather empty hall seemed to stand still for the mannequin competition and all present probably prefer Musicon, Baroeg and Nobel over het Paard. Following this high was up to first headliners Necrophagist. Their horror death metal not only sounded good, it was brought with some good humor as well. The female head with twisting tongue or the leg for a cannibal act were both hilarious. All this over some good music made this the second  great show of the evening. Also some more people had arrived by now. 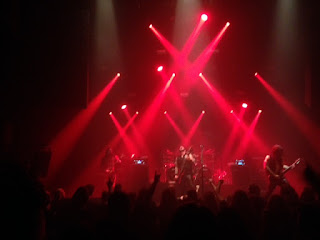 When I Am Morbid started one could see this is a great band at work. Sheer professionalism coming from the stage and a light show to match it. So I am not only not morbid, neither am I the biggest fan of Morbid Angel. I saw them once at Dynamo 1991 I believe and at that time I still thought that all metal vocalists should sound like Dio or Geoff Tate. Later on I appreciated grunts and now I could see this is a great band. Actually the music was not that brutal as the guitars gave it a clear Heavy Metal touch as well. The show went down well with the audience and now the question is if het Paard shall put more metal on the agenda. Next week there is a new chance with Exhumed. Those who stay home can later on not complain about the lack of metal in Troje.
Posted by erikprogtricolor at 13:16