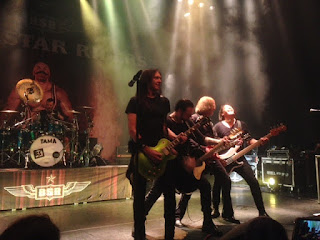 It is June and Holland has no major metal festival. That is sad and good news at the same time. Many bands playing festivals in Belgium and Germany stop over for a show in Holland, meaning a longer set and full show. Black Star Riders is one of them, later this month to be seen at Rock Hard and Graspop. Tonight it was Leiden though on route to Germany. I can't make it to these festivals and enjoy the shows nearby. There is a flipside a well to this. Those who go and see them at a festival might not be inclined to spend their money on a clubshow. So a rather empty Nobel was the result.
Black Star Riders is the follow-up of Thin Lizzy. With only Scott Gorham as original member, they rightfully decided to change their name when releasing new music. Three CD's down the line they are currently touring Heavy Fire. First we had Dutch openers Tricklebolt. I never heard of them before, but it turned out they played Classic Rock and did so well. Good sound, playing and voice, yet I missed something. Wen they came to semi-ballad When (I think?) it became clear to me. When they moved to a break, the song was screaming for a crying guitar solo and the Hammond once again took over. Turned out that there basically were two rhythm guitarists at work and I think that if they spice their songs up with some guitar wizzardry they become much better. Now the heroes of the band were sitting at the back behind Hammond and Drums. Keep an eye on them though with their Purple-ish sound. 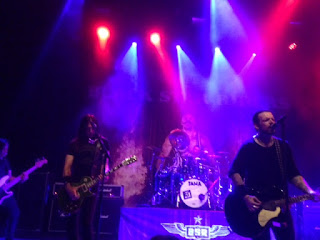 Black Star Riders came on after the break and opened with All Hell Breaks Loose and Heavy Fire. A few things stood out immediately. Even at a half full house, they gave it all; Those coming for a Thin Lizzy set went to the wrong place and Ricky Warwick has a great voice with some Lynott alike soul in it. Starting with the last first this came as a surprise to me. OK on CD he was good, but years ago we were not his biggest fans. In the late eighties he sang with The Almighty and we got the impression their music was plugged as he was dating a blond girl from TV (either Amanda Reddington from Sky or the blonde bimboo from MTV Headbanger's Ball) I even saw them at Monsters of Rock Donnington and wondered how that band got that exposure. Well that is long gone now as his presentation was sympathetic, his voice very Lizzy and his ego not the least annoying. While I mentioned Ricky and Scott the secret leader of the band turned out to be Damon Johnson. He played the majority of the solo's, kicked off some songs with the riffs and told us through his guitar in the end that there was no Whiskey in the Jar. That was the only Lizzy cover next to the alltime classic The Boys are Back in Town. And yes these were two highs of the evening, but not that outstanding that there own work seemed flat. Actually they followed ther biggest hit smartly by fast rocker Who Rides the Tiger and  atmospheres stayed up. Ok the audience never really go loud or wild, but it seemed to me all were enjoying the show more than a bit. I do agree that they play own songs, with three abums to choose from. Maybe if they release no new album, they can one day consider a Thin Lizzy set. For now I might see if I go get their second album The Killer Instinct as well. It is their only one I donot have and it turned out that the title track and Soldiertown were among the best songs of the night. This was one evening of classic hard rock played as if it was 1979. Strong recommendation for those who go to Graspop to not miss them. And if the drum solo stays in the set, there is always a bar or toilet you need to visit. 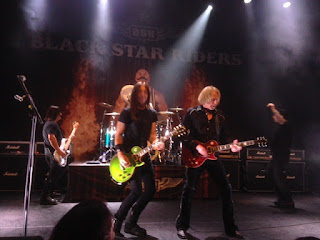