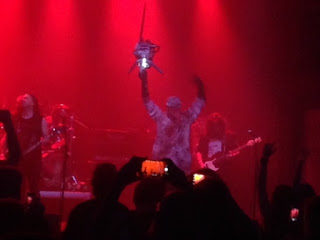 Het Paard is puting on some metal shows again after hardly any over the past years. This means that we have to go even if not knowing the bands. I checked out Exhumed on the net and found them to be at least interesting. So while outside the birds were suffering from the heat het Paard offered good airconditioned metal on a late afternoon. Being sunny meant I missed Warborn Waste, but they play often. Procreation was on stage when I arrived. This turned out to be a band blending calmer parts with their Death metal and by doing so managed to keep our interest throughout. Next on where Rectal Smegma (what's in a name?) If Rene asks me I wonder what you make of that in your review, it is a sign they play out of my comfort zone. So I could make little of it indeed. Brutal, very brutal grindcore. A vocalist in reflecting yellow shorts only, short and furious songs. Not a word to be understood and energy. Yes lots of energy on the stage bouncing back in the hall and mainly the younger visitors seemd to love it. Interesting and different it was, for me not to be played at home though. 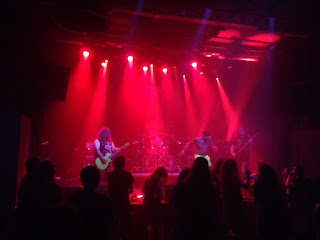 Exhumed are American and ended their European tour in The Hague.  Luckily at the begin of the evening some people had arrived as this was a clear headliner again. This Death Metal was improved by great guitar work with lots of solo's. While this band is still pretty heavy their great musicianship made it all the more accesible. Some months ago Blood Incantation blew me away live and this band reminded me of that a bit. And then when halfway the set a masked man with a chainsaw comes on stage and dives into the audience starting a circle pit the term friendly violent fun popped up again. Exhumed proved again that you do not need to know a band at all in order to have a great evening when a good show is presented. As later on even Chezy flew by in the circle pit I guess I was not the only one impressed with this band. So with the alternatives being the beach or a BBQ it turned out that a Dark and cold Horse was the right choice. Coming home early I could even have an outside beer to close the day and a metal weekend. 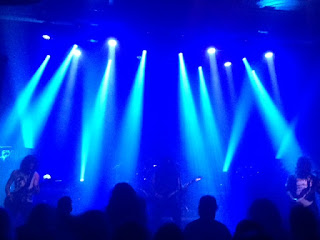