Thrash Metal is all around this year and new discoveries never seem to stop (see Overruled last weekend only). Therefore herewith some international tips of 2017 favorites of mine. I shall not concentrate on the CD's as such, but give some background why I like these albums so much. Of course I should include Dutch glory Distillator - Summoning the Malicious, but I did not get my copy yet. I shall do so when they tour that album. In order to bring some order in discussion I rank in order of bandmembers descending. 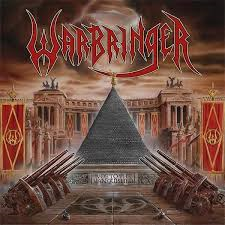 Warbringer - Woe to the Vanquished
Warbringer probably played the best thrash live show I saw this year (considering Flotsam & Jetsam Heavy Metal here) This quintet were awesome in Tilburg and opened with the first four tracks of this album, which I therefore bought after the show. Being the only album of the three surpassing 40 minutes there is a reason for that. The last song is an epical track of 11:11 minutes, When the Guns Fell Silent. That song alone for me would be a reason to check out this album.Running for quite some years it was the first time I saw them live. Having been away from Holland for four years they promised to be back soon and so they do. Announcing shows in Little Devil Headlining and in Baroeg supporting Death Angel, both more than a bit interesting I would say. Unfortunately I shall be on summer holidays, which always means missing some shows. Still for those being in Holland early August this weekend  also has Sanctuary, Fates Warning and Schollenpop, still suggesting to include at least one of the above mentioned gigs. 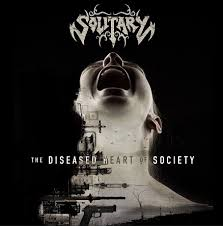 Solitary - The Diseased Heart of Society
Solitary are around since 1994 and I never heard of this quartet before. This is not only my fault as I donot recall any interviews or reviews in Aardschok and checked major dutch webzines without any reviews. In the buildup to their Dutch tour in June I checked internet and decided to order this last and recent release. What I did very right was ordering the bundle together with the book of founder/guitarist/vocalist Rich Sherrington I Promise to Thrash Forever. Well this book explains why they were never that visible abroad. It reminded me strongly of an underground version of the Stroy of Anvil. It is all there the friendhsip, the struggles, the bandmembers caroussel, the highs and many lows. But most important the way to never give up, which makes this book holding the right title. 8-10 June they make a short tour through Holland Geleen, Nijmegen and The Hague. I am proud and pleased to inform that I shall reopen my HM B&B for that and can only tip everyone not to miss this tour. For a taster check out their video of Unidentified. 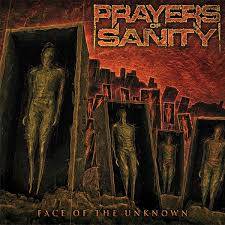 Prayers of Sanity - Face of the Unknown
This band was possibly the best discovery at Evora Metal Fest early March. Starting to follow the Portuguese trio since I noticed this album would be released 29 April. As coincidence runs I would be in their home town that very day, so I asked them if there was to be an album release show. There was, but not in Lagos, nor that same weekend. Lagos holds no venues for metal and 29 April was the weekend of SWR Barosselas, where both Tiao and Artur would play with other bands. So I missed the release party the week before, but I did meet bassist Carlos in Lagos and can proudly state being the first foreigner holding their CD and T-shirt of Face of the Unknown. This album continues where they left me at Evora, namely good old Bay Area thrash. Setup of this album is as traditional. Four fast bangers, an instrumental short song, where in the past you would flip the LP and then 4 other fast songs to close. I do hope they make it to tour Europe and me being able to help when they reach the low countries.
Posted by erikprogtricolor at 15:20