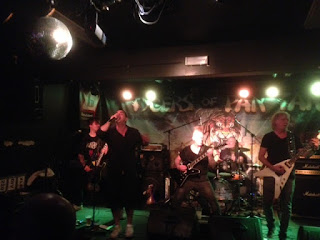 Tygers of Pan Tang in Musicon. Lovers of NWOBHM can not complain as over the last two years we had already Raven, Trespass, The Deep and Tokyo Blade on stage. They are on a small European tour with Headless as support. In order to party the evening up a bit Musicon had Martyr as openers. Anyone in Holland with a minor interest in heavy Metal should know Martyr. They play a lot and when they are not gigging they come see other bands. So we do not get surprised by their show anymore and let's face it as legendary as the Schollenpop closure of 2015 it never can get again. Yet they never disappoint and tonight we got a tight set of 45 minutes. As vocalist Rop knows at least half the audience he remains busy of stage shaking hands, hugging and taking pictures. Mind you he can sing and the band is backing him very strong. Monster: You Are Next and I might be as well although 90 minutes of Volbeat covers might make me stop cycling all the way down. 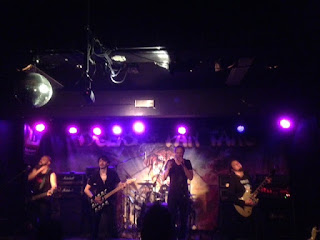 Next band Headless were completely unknown to me. Italians they are, but their vocalist is of name and fame Göran Edman. Last time I saw him on stage was with Karmakanic at de Boerderij, while Hans has his LP's with Mastodon and his most famous passing must have been with Yngwie Malmsteen. When the band started and played along I had some problems in getting their style. They started with some bluesy hardrock in my ears, which was the best part of the set actually. Then they covered a ballad of Yngwie and moved to melodic rock areas. A band covering Yngwie must have decent guitarists and actually they all could play. They lacked a bit of drive and enthusiasm and a rather reluctant audience stayed mainly near the bar. 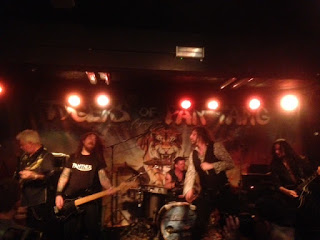 The evening closed with Tygers of Pan Tang. For starters they brought along the biggest banner ever to grace the wall of musicon as the cover of their last album went wall to wall behind the stage. I was curious how they would be as last year they could not match Tokyo Blade to me in Baroeg. This was also caused by the fact that they toured just before their new album was released. Now I have this self titled album and it actually is a very strong one. So the songs they played from that album sounded known and good to me. Opener Only the Brave, Aerosmith alike Glad Rags and Devil You Know where amongst the highlights. But as with all NWOBHM bands we of course came to hear the classics and they were there as well. Euthanasia, Gangland and Don't Stop by. The best came at the end of the regular set when we were asked if we wanted a fast song. What followed was their best song ever Hellbound in  a furious version. This immediately followed by Suzie Smiled. Talking about Suzie smiled anyone into NWOBHM who likes reading should get the book of the same title by John Tucker. Next to No Sleep 'till Saltburn must reads on the history of music. After a short leave to the back of the room we were treated on an encore and Love Potion No.9 was played at the end. Again I forgot to tell the band that that song in Holland is related to Lee Towers who represents bad taste in music. Not a party closer in Holland therefore. Still I must say that the Tygers overpassed my expectations as I thought them much better than last year in de Baroeg. I also love it that nowadays all these bands from my youth release new albums of power. It was Friday it was Musicon and we saw it was good!