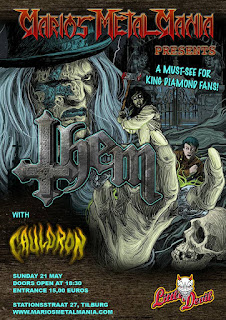 Them released last year the very strong album Sweet Hollow. Touring Europe now their dutch gig was in Little Devil. During the build-up of this gig something different was announced as they would bring actors to play the full story and not just the songs. Support would come from Canadian traditional metallers Cauldron, so Hallo Little Devil yet again. The choice between car and train is always a difficult one as both made me miss parts or full shows in the past. This evening I choose train and someone was taking a walk on the rails so I had to detour via Utrecht (It's a sign, it's an omen!?). Result I arrived somewhat late in Tilburg and missed the opening of Cauldron. In the warm Little Devil it turned out that Cauldron could not attract much response from the audience. I never saw them before and like their style of metal. At the same time hearing their songs for the first time I was not blown away really. All passed seemingly calmly and the energy was not there between band and public. Many people opted for an outside beer in the warm evening and I followed after some songs. 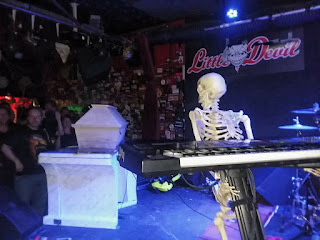 Coming back at the venue the stage was set and there was a coffin and a corpse. Several actors at the side of the stage and interesting enough many boxes from the stage show at the side. So I ended up hanging on stuff that was packed at the side, finding a good view to see what was coming. Then I noticed my phone touchscreen died and I would not be able to take any pictures (another sign?). If ever I saw a show that would be much better of by a review of 10 pictures instead of a 1000 words it would be tonight. The fact that Little Devil is small made it even better as we all were straight in front of the stage and got what turned out to be a metallic horror play in the story of Sweet Hollow. Starting with the music as that is what we came for in the end this band is great. Them started as a King Diamond tribute band and you can still hear this. Vocalist Troy throws in the occasional high scratching scream, the guitar duo (Lanfear/Viking) throws solo's all over the songs, keyboards (Ivanhoe) give the atmosphere and the rhythm section is solid and heavy. The bassist even has a name and can say hi, hallo. Sorry but forgot which thrash band he came from. The music played followed the story of the CD of course in running order and with some acted intermezzo's. As you would wish for, live these songs came over even better and louder. After the album was finished and a loud cheer came from the crowd a new song was played as an encore. This was one from their forthcoming album to be released next year, whose title I forgot. This was not only a rock concert, but a spectacle to watch, so a special thanks to the three actors who played Mary, Henrietta and Ransom. This was definitly one show to remember, so any friends in Lisboa reading along go and see them on Wednesday. One bewitching experience which I can not proof with some of my traditional poor pictures. Well Troy looked like the design above and the stage before kickoff I knicked from Them's own page. Yet I can not finish without making a comparison. How is it possible that in same Tilburg Ayreon sells out three nights 013 (some 9/10.000) in a few hours and Them does not sell out Little Devil? I am biased as I can't listen to four Ayreon songs in a row without female choirs getting on my nerves, but Them is as dramatic and way more metal. I am sure that next time they have to move to a bigger venue. Everyone present yesterday shall be interested in their next album/tour and spread the news on how good this was. Ending with some references imagine Iron Maiden Tilburg 88 Seventh Son being performed in Little Devil, or Dio's Sacred Heart tour around that time. Nowadays only Hell of similar size puts on such shows. Them came, bewitched and exorcized (although Troy probably did not get the dutch swearing at him for killing the lovely girl). Thanks to Mario and Little Devil for bringing this remarkable show to Holland. Those who were present can one day say: I was there!
Posted by erikprogtricolor at 17:09