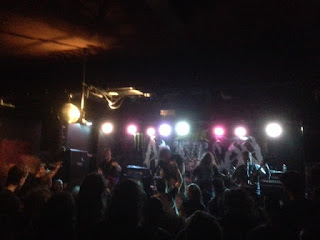 Metalcon is the next in line of smaller metal festivals calling it quits after several editions. I guess it requires a lot of time and energy to organize such an event. So where I visited last month the final chapter of Very 'Eavy, this weekend Metalcon had it's final edition. Metalcon is strongly leaning on the heavier death metal end, but since last year the Pre-party on Friday is somewhat lighter. I got my weekend-ticket and therefore kicked of on the Friday. 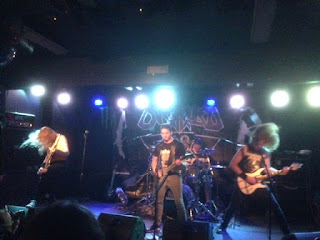 Dinner with Tiago made me miss the early start, but I am sure Rages of Sin shall play at a venue near home soon again. So for me The Dutch Duke opened Metalcon. This was an opening with some technical issues, as the guitar was not coming through during the first two songs. Being a power-trio this is a handicap indeed, but when all was sorted they quickly ran through the time that was left for them. Heavy Rock and Roll, covering Ace of Spades and last gig of their drummer. Next band were Extremities from Eindhoven. I saw them play Baroeg Open Air and Complexity during the last year and like their djenty metal. This performane was a good one and they are turning into a machine of riffs. Maybe a Progpower pre/post dinner break band one day. Hereafter Overruled were the surprise of the evening. Yet another great thrash metal band from Holland. Their presentation was the most energetic of the day and their playing and songs matched it nicely. Ending with a cover of The Mechanix, these guys can play and brought the atmosphere up. Later this year they shall release a debut album and I wil get it. Headliner of the evening were Order of the Emperor. They play hard-rock and at times I heard even some Skintrade influence in their grooves. As the Saturday promised to be a long day and I will see them with Dead Daisies next month I left early and saved on sleep and liver. 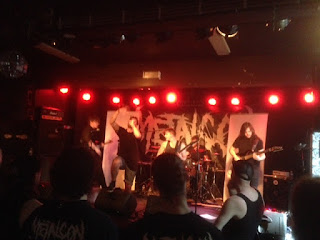 Saturday I wanted to be back early for two reasons. First I wanted to see opening band Icarius again and second I was planning to leave for the annual football tournament of my old team. Explaining for foreign readers here, in Holland we don't play in parks and open fields, but at football clubs in organized competitions. I stopped playing a the high of my career this month 25 years ago, when I also withdrew my availability for the national team. Now my old team has an annual friendly tournament in May, with 24 teams and ending in food and a cover band. Unfortunately before the band starts there is a DJ and musical taste at football clubs can best be described as total shite. Yet it was good to meet many friends again. In order to stay in line with the sad news of this week I created during Metalcon a Black Hole in the Sun. 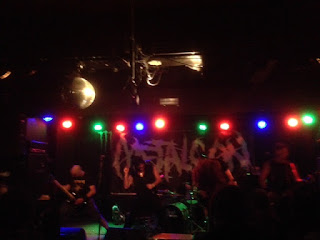 I did arrive at 13:30 sharp though and Icarius kicked off. Coby was not around to see Nick play this time, so I can tell her he did well. Their modern metal is not fully my style, but they play tight and I believe they are becoming even better with time. Next band 3rd Machine was the most Progmetal band of the weekend and like before I liked their show. Leaning towards the heavier end at Progmetal today they were amongst the lightweights in heaviness. Last time they played Musicon was during Rob Rockstoel's memorial and they dedicated a song to him today, which was a good thing. Then quickly things became mortal when Contorted Mind hit the stage. Not sure how deep this guy is going to get his grunt out, but that was one impressive low gutteral feast. This music goes a step beyond my CD collection, but it is hard not to appreciate this performance on stage. The next band Illusionless, was one I was looking out for after  my pre-metalcon internet search  Turned out they were as good as I hoped for. Solid Progressive Death Metal that went down very well at Musicon. They also managed the return of the rowing boat in the audience. Last year at BOA I saw that first and while only small in size I like this sit down and row effect, must bring it to other festivals one day. As I left immediately after their show and returned only after a few hours I missed the chance to get their album. Will keep an eye on their upcoming shows and correct that later. There is really no better medicine to get bad music out of your system than go and see The Modern Age Slavery. These Italians gave us the perfect Tech-Death show, with the breaks, the solos and the presentation. For me probably best band of the weekend  I now am playing their last album Requim For Us All, which I got afterwards. It is these bands you discover on small festivals that make it so great to go there. And then came Ingested from the UK. If ever the term going out with a blast could be used, Metalcon hit it on the nail. I guess Ingested might have been the most brutal band ever to play Musicon. It was fast, it was heavy and then it was a bit faster again. When they asked for the place to bounce from the foking floor to the foking ceiling one might guess this exagerated. Well the room came close. This was a party in brutalness and a packed Musicon seemed to appreciate it to the full. This was the perfect closer of Metalcon history. Thanks to Dennis and the full crew for organizing this and giving me the chance to make some great discoveries. Hopefully someone will fill the gap in the region with a new initiative.
Posted by erikprogtricolor at 16:03