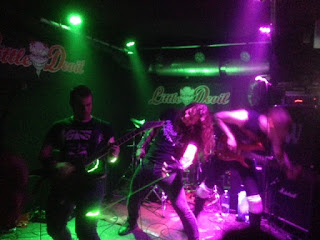 A lot of good music is being released almost every day. So it can happen that you miss bands that are right up there with some of your all time favorites. Sacral Rage turned out to be such a band to me. When this show was announced I read the name Watchtower as reference and knew I needed to check this band out. With the ease of the internet I listened to their full album on bandcamp and ordered it thereafter. That same page shows covers of Priest and Mercyful Fate to give some references. What I heard as well was a healthy dose of Crimson Glory and Agent Steel. Resuming this is one fine band and I was more than a bit curious how this would come over live. Little Devil it was, but 14 May it was as well. This day Feyenoord was supposed to become champion in Holland after 18 years, which means a lot drunk people around and even a chance to top last week's disaster and fail again (which they did not). I mean to say by this that the train was not an option and car it was. As there were no flagwaving supporters driving drunk on the Rotterdam Ring the road was clear. I even got followed by some police vans who were on standby from southern cities. Result of police vans behind you is that you follow your speed and I missed some signs as the road to Tilburg turned out closed so hello Belgium it was and back up to Breda. So later than wished for I entered Little Devil. 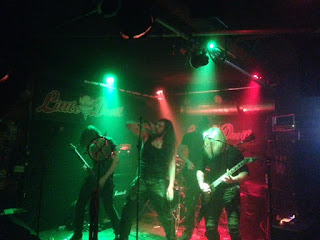 Pull me Under came through the door of the venue and Epic Mind turned out to be a quartet with some courage covering Dream Theater. If there is any genre in metal, where I am fairly thoroughly informed it must be progmetal. Still I never heard of Epic Mind and they seem to be almost ten years running. After this cover they only played one more very long own song, so I can hardly judge their set. My impressions were: good musicians, vocals must be to your liking and they were no stage animals really. I will go check them out again if nearer to home and give a fair opinion. Next on were Germans Xternity. They took some time to tune, but turned out to be very good when playing. If closing my eyes I might have thought I went to de Nobel after all this evening. Their technical extreme metal with Blackish vocals came closer to Belphegor than today's headliner. I did not get an album immediately and after the show they took their long drive home already. So warmed up we were for Sacral Rage. Friends told me they played Keep it True some years ago and were brilliant, so let the madness begin. 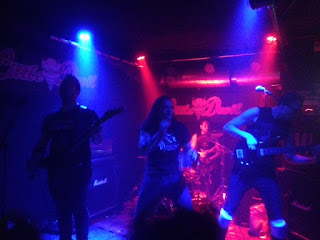 Sacral Rage on stage and the knee protectors of the bassist reminded of Watchtower indeed. In seconds we could also hear that this band is of the top-category as musicians. Well that goes for the instruments as Dimitris was during the first songs struggling a bit with mics. When that was sorted his voice was impressive powerfull and high, matching the quality of the band. They opened with the start of last album Illusions in Infinite Void. and Encima del Mal showed they are on stage as strong as on CD. This is eighties metal at it's best and anyone liking any of the bands mentioned above should check them out. You can add Annihilator to that as the set ended with Phantasmagoria. Most songs of the album were played and Waltz in Madness was a highlight to me. After the set the small but very appreciative crowd demanded more and they had none, so repeated a song. As the drive home was long I did not hang around long afterwards, but did get my first mintgreen LP in their debut Deadly Bits of Iron Fragments. My favorite shows are always those of new discoveries who turn out being able to deliver on stage what they presented on CD. Eighties US metal is alive and comes from Greece. Laser fingers included one of the highlights of the year, so thanks Sacral Rage, Mario and Little Devil for this beautiful Sunday night
Posted by erikprogtricolor at 18:28