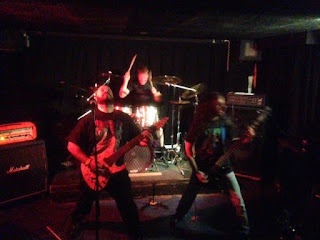 Lelahell are from Algeria, so a double reason for me to go and see them. First I love documentaries on metal in unusual places like Heavy Metal in Baghdad on Iraqi band Acrassicauda, or Global Metal by Sam Dunn. Lelahell made their own in Highway to Lelahell. Second I often travelled the MENA area for work and I can imagine live as a metal band just can't be simple over there. So when on a Tuesday night Lelahell play CAB03 in leiden I decided to have a look. They even brought Algerian weather to Holland so we suddenly face a two day summer in spring and CAB03 turned into a dark hot venue.To beat the heat there is a bar, but that is two stairs up. Before we go exotic, two more or less local bands warmed us up. 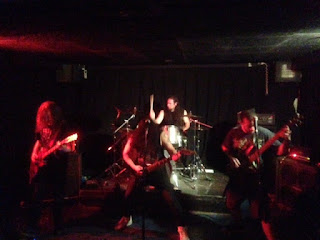 Defazer is the best thrash band in the The Hague area and I saw them a few times over the last year. Again they played a good set and now we wait for the announced EP and better merch. Hereafter local band Meadows promoted their debut album, which shall be released next week. Their music is a bit out of my usual range as their grind hardcore mix was described by themselves as some more teringherrie. They were right, although enthusiastic and energetic they were. 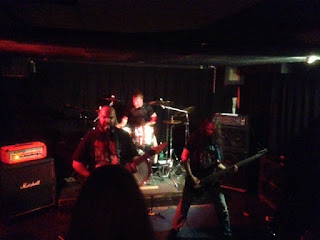 Lelahell played for a half filled CAB03. This half filled only because the place is tiny. Being Algerian or not the first thing that stood out and remained so during the whole gig was their drummer. What an animal, he seemed much  stronger than he realized, as I have seen hard hitters before, but his blasting hammering was too much for the poor kit. Cymbals flew of the drum stage, first on our right and a little later the left cymbal gave up as well. He sweated like an animal and lost several sticks in the process. During the encore he lost his one but last and Arian had to return his souvenir to keep the show going. But while the drummer took our attention, the Algerian duo up front played impressive as well. A not so extreme, rather technical form of death metal sounded fine. I did not get the song titles as the announcements were in grunting style. From their neighbouring country Tunesia I saw Myrath a few times. While that band choose to play the arab card, bringing a belly dancer, Lelahell did not need to do any such thing. Convince us with their music and performances. I am already looking forward to talking to AlgerianIron Ore purchasers in the future and as an ice brekaer ask them about the latest album of Lelahell.
Posted by erikprogtricolor at 17:25