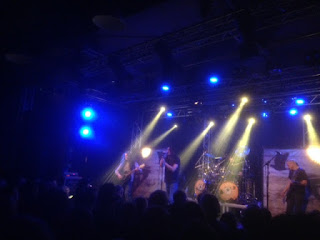 If there is one thing Hans and I always agreed upon, it is that Fates Warning stands above all others and doubts. In the mid eighties when we were at a local gig in Delft a friend of Hans tipped us on this great new band who just released Night on Bröcken. We got the point and kept an eye on that one when they moved from heavy metal into more progmetal areas, a new genre by then. In 1989 we attended their first European gig in Amsterdam supporting Manowar (a show that can be seen on DVD with the special edition of Perfect Symmetry). In the early nineties they cancelled some European tours, which was a pain before internet days. As from A Pleasant Shade of Gray they resumed touring for every new album. Usually they focus their tours around Germany, Holland and Greece, so we got to see them a lot. Still from the big three of Progmetal they never manged to get the same recognition  as Dream Theater and Queensryche did.Looking at CD's only this is very strange and simply unfair. Noone needs a lot of time to mention a disappointing album of the other two, while Fates Warning don't do disappointing albums. Even so there is general consensus amongst fans that last year's Theories of Flight is among their best albums ever. Touring Europe these weeks, they include two Dutch gigs and we managed to get a decent group together for the show in Uden. Entering de Pul it seemed that we were not the only ones gathering people as there were easily three times as many people as during their previous club gigs I saw in Weert and Roermond. This is only good news as they deserve this. One downer though was that de Pul is not a good place for a full house. Their setup with a large entrance, where you hardly see anything and a small hall with huge sound space made it a packed and sweaty event. They brought two support acts of which the first one I missed and the second one was weird. Brazilian Armored Dawn managed to only raisen eyebrows. Who put this lot to open for Fates Warning? Their Power/Folk/Pirate metal might fit Korpiklaanni but shall not win them any fans on this tour. As I might still apply for my Brazilian passport after retirement I stop saying anything here. about my future countrymen. 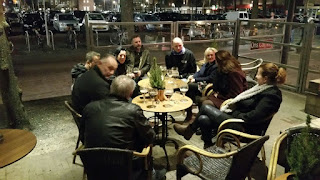 Fates Warning came on and kicked of with the opener of Theories.., From the Rooftops. Great to hear this new song and see the band was in good form. Going by some traditional fast opning songs (Life, One, APSoG III) we arrived at Seven Stars and the new album comes alive indeed. A Pity that we further only got The Light and Shade of Things, as I would have loved to see thundering White Flag. After many shows we know the build-up of  a Fates Warning setlist. Some classic songs they never avoid, some new songs and a few relative surprises. The latter might have been yesterday A Handfull of Doubt, Acquiescence and APSoG IX. Of Course I lost my voice over Eleventh Hour/Point of View. Playing around 90-100 minutes this was another show of top class prog metal. Only comment might be on the sound that at times seemed to be floating around a bit, struggling with volume swaps as well. Usually I do not do double gigs for same bands in a row, but Fates Warning (and Psychotic Waltz if ever) are the exceptions. Unfortunately this morning I woke up with the results of two late nights and  a week of a threatening cold. If not a surprising recovery is on it's course by now I have to skip Patronaat with Hans tonight. Anyone having the chance to see them don't miss this tor as they hardly have been better. 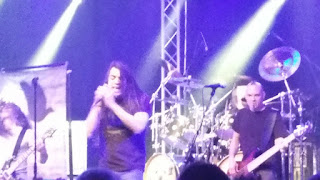