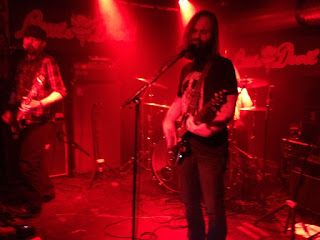 Somewhere in 2014 I discovered Dream the Electric Sleep reading a review of their second album Herectics. With the possibilities of the internet I only needed to hear the opening title track and I was sold. The nice thing about their music is that it does not fit in a box. Yesterday the poster said progressive rock, which is in there. At the same time I can see them perfectly tour with a stoner rock band, play ProgPower or fit the bill with a major alternative rock act like Foo Fighters. This unboxable part makes it nice to introduce them to some not so metal or prog friends. In comes Peter who likes his hardrock until UFO and Y&T, his prog hero is Steven Wilson or John Mitchell and he moves in many areas I don't follow. My tip was right and he absolutely got DtES as well. So Tilburg it was and to improve matters Joop after hearing some music decided on the day to join as well and apart from that to drive. This car saved us from rushing off to catch the last train straight after the show, which proved to be another valuable hour. As I always say Little Devil is the nicest hardrock bar in Holland, so an hour warming up on good beers made sense. I even discoverd a new favorite in Punk IPA. at 21:30 the doors opened to the hall and we just moved to the next bar. Standing right before the small stage we were ready for DtES. 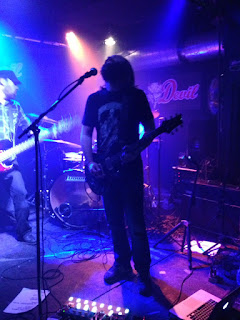 After an intro the band hit the stage and gave us Heretics. The wall of sound by only three man was there and the talking guitar lines over a very heavy base sounded as good as on the album. Next song Let the Light Flood In showed that also the vocals were good tonight. Actually all three members sing, but main vocals were as on the album by guitarist Matt Page. What followed was a ride through their albums, Highlight to me came in instrumental We Who Blackout the Sun, which has such a beautifull bridge to heavyness. Talking about heavy it turned out that Joey Waters does not do soft drumming. Most songs included some very heavy hits on his floortoms which together with the driving bass of Chris gave the songs their pulsing base to put melodies over. A show that flew by included two songs from their debut as well, which was enough for picking up a signed copy of that one after the show. So Little Devil is far from a huge venue and it was not very packed either. Still those present all realized they saw something special indeed and expressed so loudly. I stated to Peter and Joop that for me this band could grow big on main festivals like Pinkpop or Lowlands. They thought me naive and explained quality does not matter for that. Still we saw a truely great show by a very good band who turned out to be nice guys after the show. It was good to see that there was a long queue for their CD's or LP. I got the debut album, another Punk IPA and left for home pleased with a great Friday evening. 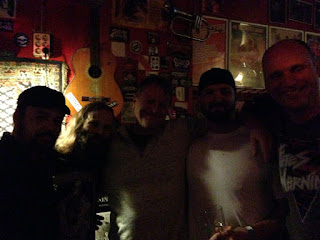