Pain of Salvation - a Sense of Gravity 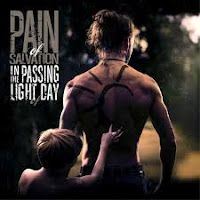 Pain of Salvation - In the Passing Light of Day
A return to old form was promised us in the build-up to this release. First clip Meaningless promised a lot even being not that heavy, dark it was. And now I heard the album a few times and I can conclude it is to me one of their best. Going back in time Pain of Salvation is this band whose first four albums should be heard by anyone with even a mild interest in Progmetal. All total classics in the genre gave them the convidence to start experimenting. Basically they managed to experiment away from me and many old fans. I am never doubting their skills and performances but they just mixed in too many unwanted genres. Besides that I came to really hate the Disco Queen after they still did not leave the bitch behind three tours later. Yet it always kept nagging as they should be able to release a new masterpiece. In the Passing Light of Day is a concept album and a very personal one too (these always are the best see the Reticent 2016). Daniel Gildenlow spent the first half of 2014 in hospital when a bacteria was threatening his life. In the booklet we can read his story and this album tells the same. As this blog is all about me let me step down and explain why I could relate very much to this.  I spent big part of the summer 2009 in hospitals, where several medical errors and diagnosis let me walk some edges of life and pain. I did start a blog at the time just to keep people informed and avoiding Josie having the same call over and over again every day. During the blackest days Josie became my co-author and it turned out that a blog was a very good tool for communications. The site I used at the time closed down meanwhile, so I swapped to blogspot and stuck with music only. I still have the messages we wrote at the time somewhere and I was more than a bit curious how great lyricist Daniel Gildenlow would translate his feelings. The day the album was released  I encountered the first opinions on the internet. As expected the range was from extremely enthusiastic to reluctant and still not as good as their past. My copy arrived a few days later by the mail and I made the wisest decision I could make and listened with nothing to disturb me and reading along the lyrics. Well mainly because of the lyrics I got completely blown away. It was all there, my fears and my feelings from almost eight years ago. If only I could write it down so nicely (my book died with only a few chapters half finished). We see the fear, the despair, the thoughts, the nightmares, the non-working pain killers, the questioning, the absence of religion and the supporting lover. When I heard of Daniel's story I once thought he would be an interesting person to talk about his fight. Now it seems he already told it all on this album, so I can only thank him for the inspirational lyrics. But this is a CD and the music always matters most. Given the above I am obviously biased but I do think this is a return to old form. This does not mean it is as heavy overall as their first four, but it shoud be easily the best since Remedy Lane for all old-time fans. The heavy opening of On a Tuesday starts of well and Tongue of God and Meaningless are slower but really dark pieces of music. Ballads Silent Gold and If this is the End could both have been taken from the Road Salt albums. In counterbalance Reasons gives us some very heavy djenty riffs and Full Throttle Tribe has this Remedy Lane catchiness around the chorus. Highlight comes at the end with 15 minute The Passing Light Of Day. Starting dark and slow the hymnlike epical chorus is so emotional. This brings me back to Josie. As she works in Portugal she will be in Holland at Easter when Pain of Salvation play Leiden. She shall hear this album read the lyrics and time allowing join me to Gebr. de Nobel. This might not be the musically best album of the year a more emotional one definitely won't be released either. Thanking PoS for this Masterpiece I end with a quote dedicating it to Josie and how she spend the summer of 2009 not sure if I ever thanked her enough: "My love don't be afraid"I hear you say, "I'll be here for you all the way"And I just wish that I could smile and say "Baby, hey, I'm in too much pain to feel afraid"  My Lover, My best friend. I'm watching it slowly slip away. Like the passing Light of Day. 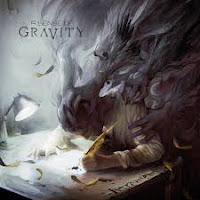 A Sense of Gravity - Atrament
Why would I add another album to review after my ode to Pain of Salvation? Well the answer is easy, this album should be obligatory for those who would like to hear a heavier Pain of Salvation. Imagine it to be 2003 and Pain of Salvation wants to blend in something new. In stead of performing acustically on 12:5 and start mixing gospel and country on Be they look hungry at extreme metal in all its forms. the result would be this album really. In my Top 16 of 2016 I stated this one came in too late for entering my list. And this was right since you need at least five concentrated lsitening sessions before you start appreciating this album in full. Opening is a short orchestral song which could be on any PoS album, but follower Reclusive Peace is probably the most extreme song of the album which suddenly drops to a melodic/clean sung chorus again. There is too much hapening on this album to describe for me really. But anyone liking heavier PoS, Extreme technical metal and Tech metal in general should give this album a try. If the grunts scare you off there are still songs that go all clean (Shadowed Lines, Promised None) that justify this purchase. The only risk I see that not everybody appreciates a blend of styles which includes the melodic prog and the extreme metal. As I have no issues with this blend I consider this definitely one of the best albums of 2016. Strongly recommended album for all extreme progmetal fans. Turns out they have four albums, but CD's of previous work sold out. Sad to see that in the sea of album releases I can miss such great bands that are right up my musical alley.
Posted by erikprogtricolor at 11:11