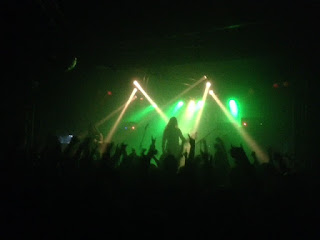 Winter's Gate is one of my favorite albums from last year and when Insomnium announced they would play this album in full during their winter tour I knew I should be there. This might sound easy, but suddenly the elements started copying the storyline of the album. Heavy storms were predicted at the coast and snow, hail and ice might fall down at night. As I have no winter tires on my car  the viking in me had to convince me that predictions are there to scare us and what could happen really. So I left for Belgium and man am I pleased that I did. Starting with Biebob a place I never was before. This is one of the surviving metal clubs from the eighties and entering it reminded me of a lighter and larger Baroeg. On the day tickets were still sold, but especially during Imsomnium I had the impression not many more people could be squeeezed in. As I was Bob for myself I could not enjoy the Belgian beers available. Arriving at a quarter past seven at 19:30 sharp the first show started. 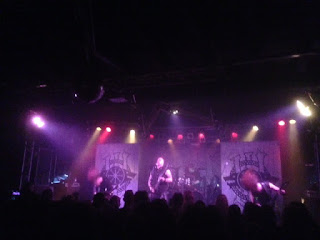 Opening band were Wolfheart, unknown to me. They turned out to be the only band of today who stayed away from clean vocals all together. In balance their guitarist was extremely melodic on his many solo's and even reminded me of the schrapnel guitar heroes of the past at times. I very much liked their show, which landed well at the crowd. During unreleased song Boneyard they even got a small pit going shortly. Something I did not see returning during the evening. Although we had a second vocalist he only added more grunts at a higher tone. After half an hour the party was over and we were warmed up by this good band. 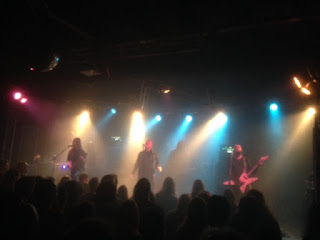 Barren Earth were next and I was looking forward to them. I discovered them when releasing their second album "The Devil's Resolve" Also last album "On Lonely Towers" I have, so playing them again this week I might recognize some of the songs. Well they opened with some oldies, but it already sounded great. This was a full stage as we had two guitarists, a bassist, keyboards, drums and a vocalist on stage. Their style is according to the sticker on their last album Finnish Progressive Death/Doom metal. I can agree to that as they have various really heavy and slow parts blended in their songs. The vocalist seemed to have no problems in mixing within one line from clean singing to a heavy grunt and back again. A new guitarist was introduced, whose name I forgot. He was the one spicing the whole show up with melodic fast solo's. This was the band of the evening that would be most Progpower-fähig. Think of a blend of In Mourning and Green Carnation. After Wolfheart's good opening another great surprise in a lively show by Barren Earth. Pity they only played 45 minutes. Highlight of the show to me A Shapeless Derelict as this is a killer song. 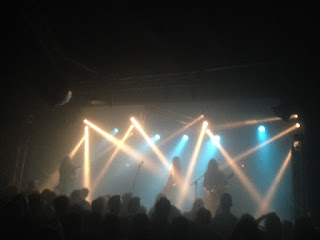 After another fast stage change Insomnium were expected and they opened with Winter's Gate. I do not know how to start describing this, Winter's Gate is one musical highlight of 40 Minutes. As the album is divided in parts at times we got a break to cheer and let a small intermezzo from tape bring us to the next chapter. The atmosphere was raised as during this performance the light was coming from the back only giving us shadows on stage. This fits the story nice and also the music managed to bring the desperate atmospheres over. For those not into this kind of music one reference. Iron Maiden managed to cretae the atmosphere of the mariner lost at sea in their epic  Rhyme of... Well here we speak about a tribe of Vikings so it has the same effect but then HEAVY. This being one song that keeps you sharp for 40 minutes makes it a true masterpiece and after seeing it live I appreciate the album even more. Definitely a Classic album in the genre and I will go back to it many times in the years to come. If only for the sudden calm break to Still I bear the flowers of pain, of solitude. The show ended with a tape with the clean sung outro and lights went to the banner with the album cover. Sensational it was and I was not the only one in awe. Then we still had part two of the show to come. The lights up front went on as well and the band members got faces and a drummer could be spotted. This part was a trip through their discography and admitted mainly unknown to me. I only have Shadows of a Dying Sun and was pleased to hear While We Sleep from that one. Now that the show turned to more human levels I could pay some attention to the band members and for the third time tonight an absolute top guitarist would rule the stage. This time less surprisingly so as his name is Markus Vanhala. Insomnium managed to stay under my radar for years, but now turned into a band I definitely shall see again when near (or not so near as tonight). So it was only Friday 13 January and I already have to wonder if many bands shall top this show in 2017. I will see many great bands I am sure, but how many debut shows to me will there be of such great bands. If ever the choice to face the storm and hail was right it was this evening.