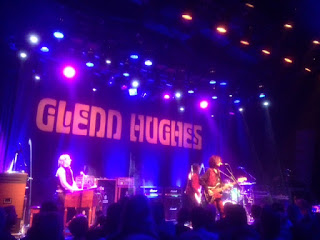 Glenn Hughes is the ultimate voice of Classic rock. Getting that doubt out of the way I can write about the show he gave us in de Boerderij last night. When I was entering pre-school he was already releasing music. Most people probably know him from Deep Purple, but he released many albums including at the begin of this decade most known Black Country Communion. My favorite work of him is the more melodic hard rock. I still look on the internet for the Phenomena box at a decent price and one of the best melodic hard rock albums of the eighties must be Iommi's Black Sabbath with Seventh Star. Live I saw him performing several times and that voice is the one thing you will always remember from his shows. After releasing the very good Resonate album some months ago we were ready for Glenn Hughes. Before he started we had support band Stone Broken, who played harmless rock which reminded me of Scottish band Logan. Nothing exiting, but decent enough. Some weird choice of music and a few beers guided us through the break for the band to hit the stage in the hall with the new name. The move from Jupiler to Bavaria does not make many beerdrinking visitors happy. 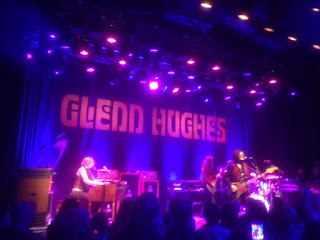 Opening with Flow from the last album gave us the chance to check all the boxes. Good band, good sound, good mood and the voice. What followed was a trip through his long career. I do not know all his work, but unknown songs were appreciated just by the great performances. Inbetween songs Glenn talked us through the set in his love and peace style. We learned he had a severe cold and a broken finger which only made his performance more impressive. Highlights in the regular set to me were "Medusa", "Might Just Take Your Life"and "Black Country". The encore gave us his best new song "Heavy"and his all time classic "Burn". What a way to close this brilliant set of true musicians. While it all was great I silently hoped for one song which I missed. Realizing that Seventh Star was not the best period in Glenn's life I hoped for one song from that album. With the sad passing away of Geoff Nicholls last week  I would have loved to hear and see either "No Stranger to Love"or "Seventh Star" Unfortunately this was not to be, but still lots of respect for the man and his show.
Posted by erikprogtricolor at 20:29