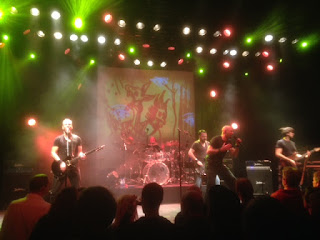 A Double package of German bands hanging somewhere between Heavy prog Rock and light Progmetal. I saw both before and was curious how they developed since then. Well that turned out to be two different stories. Hans and Yvon joined me to a rather empty Boerderij were surprisingly few Progpower faces walked around this evening. 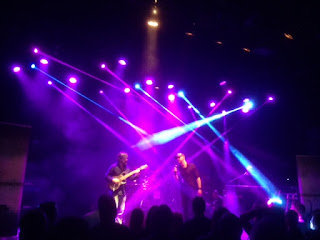 Subsignal opened and they were the one I was looking forward to most. A short history as they come out of the last version of Sieges Even. Lifecycle by Sieges Even from 1988 is the best Tech metal album ever to come out of Germany. Being accused of cloning Watchtower they developed into more Rush like territories and at the begin of the century they released two strong albums with Dutch vocalist Arno Menses. A place at Progpower confirmed their status. Arno and guitarist Steffen then formed Subsignal where some rock got blended in, but still they convinced at NotP and Progpower. After their second album I stopped  buying CD's from them as I realized the songs did not stick with me and they could not reproduce their live shows in a studio. So I came to see if a good show would convince me to get their last album. Well the conviction turned the other way. A very uninspired show, where Arno seemed annoyed by the small audience  and no spark whatsoever came over from the stage. Obviously they can all play very well, but this show did nothing to me and turned out to be a disappointment. Including a drum solo of a few minutes did not help a lot either. Maybe it was me comparing with the blast the night before, or maybe the band had a bad day but this was to me a forgetable performance. Best song was The Sea from their debut album, a song that does stay with you. 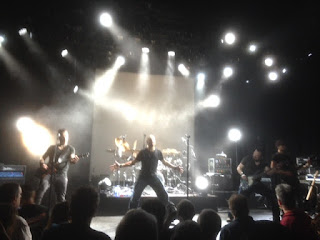 For Blind Ego the task to save the evening and luckily they did. Last time I saw them they had Paul Wrightson with a terrible cold on vocals. Now there was a new band and vocalist and they looked pleased to be on stage. The show was mainly build around new album Liquid. Being able to go somewhat heavier than their main bands RPWL and Sylvan, many solo's were fired at us. The second guitarist from Dante also took his offered spaces and the double guitar solo's were great. I only have their second album Numb and although they only played one song from that one I was pleased they choose Death. The lyrics of the chorus became my hymn when doctors told me it was probably over in 2009. I've seen the end and there's no light. You close the door and that's where it ends. There's no light Make all Gods die. This based upon a threatening bass line is a true epic song. With the vocals being fairly different from the album this version was great as well. In the end we got a show of light progmetal brought by some very good musicians. So Blind Ego did save the evening and we shall be back in de Boerderij this Thursday already.